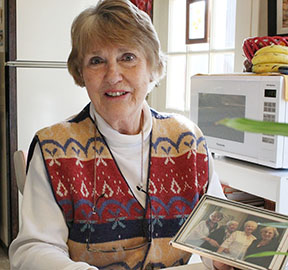 Carole Baldwin with a photo of her group of friends who she met met in high school in the 1950s. Photo by Alexander Sauve.

As we age, our family and social circles tend to get smaller which can rattle our physical and mental health. For many seniors, remaining socially and physically active is an important step to good health and long term longevity.

Carole Baldwin is many things to many people. She is an active member of her community, former educator, talented artist, mother and friend. She also knows a thing or two about living her best possible life on her terms.

Although Baldwin has lived in her current home since 1983, she is a lifelong resident of the Beach community.

After graduating from teacher’s college, she started her career at Secord Elementary School in East York for eight years. Although Baldwin enjoyed teaching, she later switched gears opting for a completely different career path and never looked back.

“I didn’t really want to go back to teaching after the birth of my son, so I thought this is the best of both worlds. I worked at the dentist’s office and it was part-time. I shared the job with someone else, so it was suitable for me,” she said.

Baldwin continues to lead a healthy and active lifestyle and believes that it is extremely important for seniors to remain socially active in their community. She attends regular fitness classes specifically designed for seniors that focus on stability and balance called Omni-Fitt.

There is also Neighbourhood Link, a non-profit support agency that provides a wide range of services for residents of the Beach and East York community. These services and programs promote physical, mental and emotional support for seniors.

A recent report by the Canadian Survey on Disability found that one in four seniors is suffering from a mental or physical health problem. While approximately 10 to 15 per cent of these adults 65 and older suffer from various forms of depression due to loneliness and lack of social and physical interaction.

For Baldwin, its friends that really make a difference.

In 1953, she met four young women in her East York Collegiate art class. They became close friends and remain so today. According to Baldwin, the group of former teachers would meet approximately 10 times a year to support each other and their families.

“We would get together in each other’s homes. When we got married and had children, we would invite our husbands to picnics and other outings. We have been through marriages, children, divorce, illness and death. We all continue to support each other,” she said.

Baldwin is also a member of the Beach Guild of Fine Art. The guild was founded in 1994, by a group of local artists from the Beach’s community.

Baldwin is an oil-based painter. She illustrates paintings of various cityscapes, buildings, landscapes and people. She has her artwork showcased throughout the year at various venues throughout the city.

For more information on the Beach Guild of Fine Art or where to purchase works from Baldwin or other artists please visit www.beachguildoffineart.com