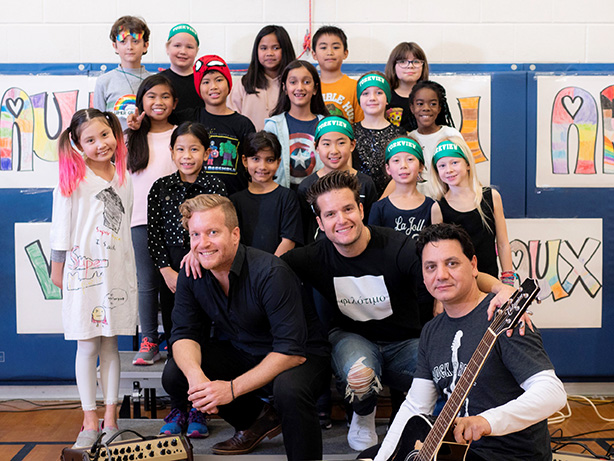 The Suns of July are shown here at Yorkview Public School during a recent assembly for Bullying Awareness and Prevention Week (Nov. 17 to 23). The band performed Beautiful You Are at the assembly. Photo: Submitted.

Suns of July, a band with members that grew up in the East York area, have created an anti-bullying anthem, Beautiful You Are, to spread awareness for International Anti-Bullying Day which takes place on Feb. 26.

International Anti-Bullying Day started from a movement in Nova Scotia, in 2007, when two Grade 12 boys and a few of their friends saw a boy in Grade 9 getting bullied since he wore a pink shirt on the first day of school. Knowing it was wrong, they decided to distribute pink shirts to everyone in their high school, resulting in most of the school wearing the pink shirts in support of their cause.


Dimos described his experience with bullying as mostly physical and it had really affected his self-esteem. He said he had difficulties sleeping, feeling nervous to go to school the next day knowing he would have to see his bullies.

Dimos said that although the song “is in a major key, the riff has a little bit of sadness to it” and when he heard the riff The Colonel created, it brought back memories of being bullied.

“When the lyrics say ‘alright, alright, you can cry on my shoulder but I’ll promise you when you get older, you’ll see how beautiful, beautiful you are’ that was written in reference to my late mother,” said Dimos.

“When I was going through all of this and I would tell her, and she would sit at the foot of my bed and comfort me so that I would be brave enough to face the next day.”

The music video for Beautiful You Are, was filmed in Metamorphosis Greek Orthodox School in November of 2019, each scene meticulously crafted to show the struggles of children and open for just about anybody to see themselves in some of the scenes throughout the video.

The video doesn’t show an actual confrontation with bullies but rather how one sits with it and how others can help in seemingly small ways to help someone going through a hard time.

“What we’re really hoping is that if this video can prevent another little boy or another little girl from experiencing bullying in the school context, even one kid, then I will feel that this has succeeded,” Dimos said.

“I want it to be seen by a lot of people because I want to people to see that it is not cool to be gratuitous and mean to other people.”

Suns of July are selling pink shirts on their website, www.sunsofjuly.com and 20 per cent of proceeds are being donated to The Sick Kids Foundation. Beautiful you are is a song that will be featured in their upcoming album that is being released during the Spring of 2020.