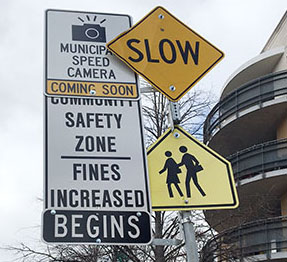 The City of Toronto will be installing photo radar cameras in every ward of the city to try and slow drivers down and increase safety.

At first, the visuals coming in from the Global News helicopter looked like just another traffic snarl in Toronto. But as the camera zoomed in past the flashing police lights and the diverted traffic, it revealed a smaller, utterly horrifying detail.

A pair of men’s shoes.

One lay on its side, the other, about a metre away, square in the middle of the right hand lane.

Those shoes shouldn’t be there.

The evening newscast was just minutes from beginning, and from the anchor desk I watched as the camera operator adjusted the shot. We would be live soon, and it would be my job to help explain what was happening.

Toronto police had just updated the situation: a pedestrian struck near Lawrence Avenue East and The Donway had been pronounced dead at the scene.

Once live on the air, I told the audience what we knew: Police had responded around 4:30 p.m. The victim was a male in his 60s. The driver remained at the scene.

Nothing I said spoke as loudly as those shoes.

Somewhere, someone was waiting for them to come home. Instead, police would be visiting with terrible news.

More than 40 pedestrians were killed on the streets of Toronto in 2019 and the death toll has continued in 2020.

Toronto City Hall has pledged to make streets safer for vulnerable road users with the Project Zero initiative launched in 2106. The idea is to use a mix of red light cameras, lower speed limits, and increased enforcement to change habits and increase safety.

Results so far have left a lot to be desired, and recent news that some of the new radar cameras have been stolen or vandalized seems to add another delay.

Speaking with Global News Radio about the cameras, Beaches-East York Councillor Brad Bradford admitted it might have been naive for council not to consider someone might steal the 365-kilogram units. The cameras aren’t bolted down so they can be redeployed as needed.

Still, for Bradford, the bigger issue is education.

“We have a long way to go with our conversations with residents and communities about why we’re moving forward with this program,” said Bradford.

While city council struggles to explain what it’s doing, Toronto residents seem to be struggling to understand why it isn’t doing more.

A poll conducted for the David Suzuki Foundation found close to 70 per cent of Torontonians believe the city isn’t doing enough to make roads safer.
Ninety per cent said they were concerned about road safety.

If you count yourself among those concerned, it’s time to ask yourself some questions.

Are you willing to accept photo radar? Or reduced speed limits? Will you resist the temptation to speed when running late, or to check your phone when someone texts?

As pedestrians are we willing to turn off our earphones? To wear something visible when out walking on dark winter nights?

We all need to take more care, to slow down, to be more aware of our surroundings.

After all road safety isn’t just the responsibility of planners and politicians, it starts and ends with you and me