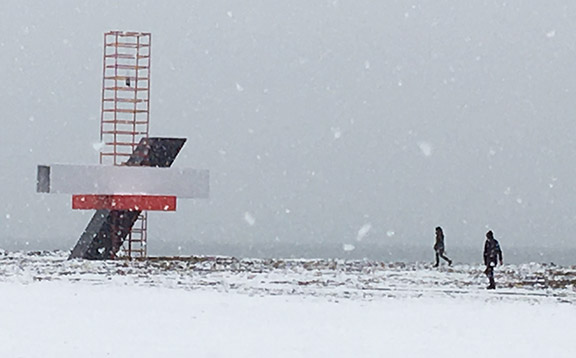 The Kaleidoscope of the Senses in one of four the Winter Stations 2020 installations on Woodbine Beach. Photo by Alan Shackleton.

An opening night ceremony was held on Thursday, Feb. 13, at the Fox Theatre on Queen Street East in the Beach to give area residents a chance for residents to see the winning artists talk about their designs and what inspired them to create them.

The winning submissions this year are: Mirage by Cristina Vega and Pablo Losa Fortangordo, Kaleidoscope of the Senses by Charlie Sutherland, Noodle Feed by iheartblob and The Beach’s Percussion Ensemble from Centennial College.

Losa Fortangordo talked about how both he and Vega wanted design a device that would play to the spectator’s vision depending on where it is.  After going through past works by himself and Vega, he wanted to highlight that they both noticed “the difference between the drawing documents and the experience/realty.”

The presentation was then handed off to Sutherland, who began by showing past projects he has done and also inspired by. The Kaleidoscope of the Senses targets hear, touch and smell as the structure has an open bell that when hit by wind creates sounds, a chimney that emits aromas of oil and a tactile bench within the structure that is the only thing the observer can make physical contact with.

The presentation by Centennial College students for The Beach’es Percussion Ensemble was made by several students from different programs.

Sasha Belitskaja and Shaun McCallum were at the Fox to talk about iheartblob’s Noodle Feed installation. They explained how social media is a big part of their process and how it blends into architecture.

“We wanted people to interact with these objects and distort, add, subtract and change it by their own self,” McCallum said.

With Noodle Feed there will also be an Augmented Reality App that observers can download onto their phones to leave digital traces of their visit through pictures, stories and drawings that other people on the app can view.

The ceremony concluded with an invitation to the opening exhibition of Winter Stations on Family Day, Feb. 17 at Donald Summerville pool at the bottom of Woodbine Avenue, 1961 Queen St. E. , at 11 a.m. The Winter Stations will be set up on Woodbine Beach until March 30.

The pop-ups are free events and following the theme this year, Beyond The Five Senses, each Sunday will be based on a sense, the first one being “see” which is a photography workshop on the beach with Diana Nazareth.