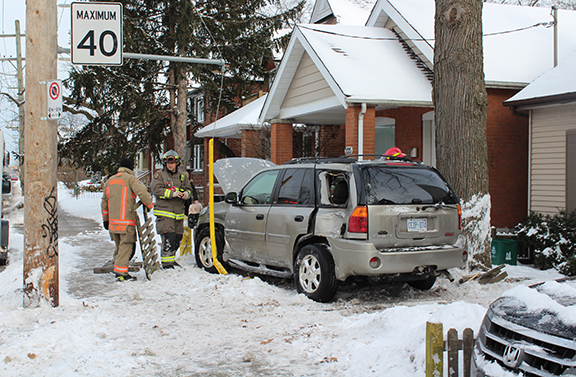 This SUV ended up on the front yard of a house on Gerrard Street East, just west of Norwood Road, on the afternoon of Friday, Feb. 7. The driver of the SUV, which was headed east on Gerrard, was reportedly cut off by the driver of a vehicle who fled the scence. Photo by Alan Shackleton.

There were no serious injuries after an SUV ended up on the front lawn of a house on Gerrard Street East on the afternoon of Friday, Feb. 7.

The crash occurred shortly before 3:30 p.m. on the south side of Gerrard between Norwood and Kildonan roads.

The SUV, which was heading east on Gerrard, was reportedly cut off by another vehicle whose driver fled the scene.

The driver of the SUV lost control after being cut off and the vehicle mounted the sidewalk, struck a telephone pole on the back driver’s side and then ended up on the front lawn of the home at 2123 Gerrard St. E.

A large tree on the front lawn of the home helped prevent the SUV from potentially crashing into the house.

At least three people were in the SUV, and the owners of the home took them in while they waited for emergency crews to arrive.

There was no description of the vehicle that fled the scene at the time of this story’s writing.

A local resident who lives a couple of doors to the west, said speeding and aggressive driving are a constant problem on that stretch of Gerrard Street East.

She was critical of the lack of speed enforcement along that stretch of road by police.

“We used to have officers with speed trap enforcement along here once a week, but I haven’t seen any for years now,” she said.