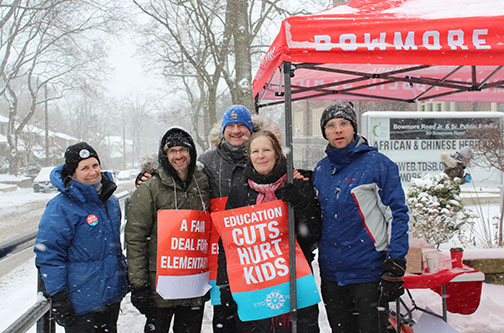 Teachers from Bowmore Road Junior and Senior Public School were on the picket line on Friday, Feb. 7. Photo by Alana Rayman.

Teachers at Bowmore Road Junior and Senior Public School were on the picket line in front of the school on Friday, Feb 7.

The teachers are part of the Elementary Teachers Federation of Ontario and they were taking part in one-day strike of Toronto District School Board elementary schools in hopes of getting their voices heard on educational issues including overcrowding, cutbacks to programs and mental health services for students.

“I think we are coming clearer on the message that we’re trying to communicate; that we really care about public education,” said Bowmore teacher Dale Davis in an interview with Beach Metro News on Friday morning.

The teachers were on picket duty in two shifts in front of the school on Bowmore Road just south of Gerrard Street East. The drivers of many cars honked their horns in support as they passed by.

“There’s been so many cuts already and they’re talking about cutting another $150 million, so we need financial support,” said Davis.

Music teachers such as Paul Butters are being affected by these cutbacks from the provincial government.

“It’s not only hard for us, but for parents as well that need to find daycare when there’s these strikes. Everybody loses out, but we have a lot of support from the community,” said Butters.

Friday’s strike was the second day in a row that elementary public school students in Toronto were out of class, as the Elementary Teachers Federation of Ontario held a province-wide strike on Thursday, Feb. 6.