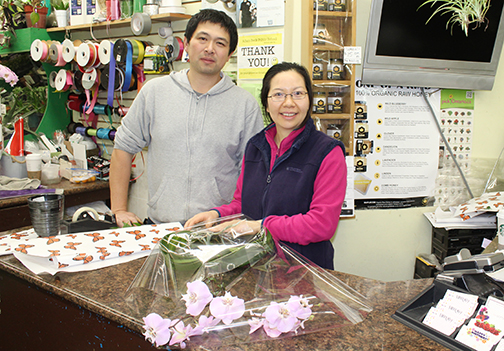 Andy Sue and Wing Ye have been running the Flower Centre on Kingston Road for the past nine years. Late last month Andy was subjected to racist rant by a woman he did not know about the coronavirus. Photo by Alan Shackleton.

People from across Toronto have been showing their support for the owners of a Kingston Road flower shop after an incident in which one of the store’s owners was subjected to a racist rant regarding the coronavirus because he is of Chinese descent.

Andy Sue and his wife Wing Ye have been running the Flower Centre, at 1012 Kingston Rd., just west of Bingham Avenue, for the past nine years. The store has been in Sue’s family since 1972, and he grew up in the area and now lives in southwest Scarborough.

He said he was stunned to have been the victim of a verbal attack by a woman he did not know who came into the store on Jan. 24, the day before Chinese New Year, and blamed him for the coronavirus.

“We’re Canadian and no different from anybody else here,” said Sue. “To be singled out for the coronavirus, when I had nothing to do with it was so offensive. I was being made the face of the coronavirus by this person, and they were blaming it all on me.”

Andy and Wing, who grew up in Leslieville, were understandably upset by the incident. Sue shared his experience on a BlogTO story about racist incidents being directed towards people of Chinese descent in the city. That resulted in television news story, which then raised the attention of others in the community to the incident.

Fellow Kingston Road business owner David Brown, of Fearless Meats, felt it was important to take some action and show support for Andy and Wing.

This weekend, he offered a promotion in which anyone who bought something from the Flower Market on Sunday, Feb. 2, and brought the receipt into Fearless Meat would get a free six-ounce burger.

Brown posted his offer on local Facebook and other social media sites, and from there it took off not just in the East Toronto community but across the city.

He estimated that they had given out more than 200 free burgers to people with receipts by late Sunday afternoon, and the giveaway would continue until 7 p.m.

Sue said the Flower Market was busy all weekend, but especially so on Sunday because of the Brown’s actions.

“After Dave Brown put that out on Facebook, it really blew up,” said Sue.

“We are very appreciative of touched by all the love and support,” he said. “There’s lots of support coming from the people and other businesses in the community.”

The story has also drawn media attention from across not just Toronto, but all of Canada.

“I’m being contacted by people from B.C. about it,” said Sue. “I had no idea how far reaching it had been and how people are reacting to it. It’s a lot to take in.”

Sue said he and his wife are touched by the support they have been shown.

“It’s hard to express how much it means to us to have everybody coming. I am humbled by it,” he said. “It’s overwhelming.”

Brown said he felt he could not stand by and not do anything once he had heard of the incident.

“I heard this had happened and it wasn’t right, so we wanted to do something to help them,” said Brown.

He said some of the customers who came in with receipts told Fearless Meat staff to use their free burger for other people coming into the restaurant.

“So that was nice of them to do even more to help others. A win-win for everyone.”