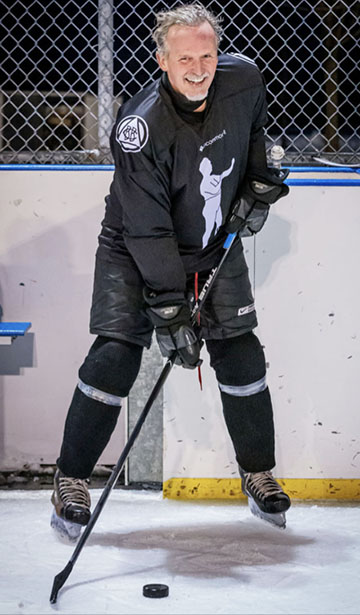 On a rainy Friday night, Doug Browne wrapped up 43 years of Balmy Beach Club Hockey (BBCH) on the very rink he first learned to skate on.

Browne, 63, played his final game for the club on Jan. 24 at the outdoor rink in Kew Gardens. He was the longest continuous member of the club’s hockey program, having first started playing with BBCH in 1976 at the age of 20.

His final game was a special night featuring a ceremonial face-off, an in-game interview, the game puck and the well-wishes of generations of Balmy Beach Club hockey players and fans.

“I would like to thank everyone I had a chance to play with,” Browne told Beach Metro News.

“Coaches, managers, trainers, refs, Zamboni drivers, pro shops, photographers, snack bars, bartenders, physiotherapists, and my family, of course, I love you all. A special thanks to my friend James Dann who made my last game at Kew special. I will always remember it.” BBCH has held an outdoor game called the Winter Classic in honour of former player John ‘Jocko’ Thompson for the past eight years at Kew Gardens since, and Browne felt that would be the right moment to end his hockey playing days with the club given it was the rink he learned to skate on as a five year old.

“I first skated at Kew in 1961,” he said. “The rink was packed on weekends with skaters of all ages. There was snow, lots of it, on the ice. It was a two-storey building back then where we changed our skates, and classic skating music was playing.”

Browne grew up in the Beach, attending local schools Williamson Road, Glen Ames and Malvern C.I. Kew Gardens was part of his life as a youngster, and he took part in many sports and activities there.

“I grew up at Kew, winter and summer,” he said. “I was either skating or running there. To play my last game there is very special to me. It is home.”

Traditionally, BBCH’s Winter Classic features four games with the first one being for players over 50 who join in together to form two sides from the club’s six league teams The Greens, The Blacks, The Golds, The Whites, The Blues and The Reds. Browne played in that oldtimers game on Jan. 24 for his final time.

The game opened with a ceremonial puck drop by Beaches-East York Councillor Brad Bradford in which Browne faced off against fellow BBCH veteran Kenny Grieve (who has been playing hockey with the club for 41 years). Play by play for the game was provided by James Dann, who also interviewed Browne on the bench for fans and fellow players to hear. In May of last year, Browne retired from Toronto Fire Services after a 35-year career as a firefighter. He first joined the North York Fire Department in 1984, and served his final 10 years as Captain at the Beach Fire Station 227 on Queen Street East.

He said hockey also played a role in his firefighting career, where he played in the fire department league for 35 years.

“I was welcomed with open arms,” he said of the North York Fire Department when he was hired. “They take hockey very seriously and each department had good hockey teams with some ex-NHL players. To win the championship was huge. It was an honour to play for the department and work as a firefighter.”

Sports have always played a big role in Browne’s life. Along with hockey he also played lacrosse, baseball and raced canoes with the Balmy Beach Canoe Club. He played for the Beaches Lacrosse team that won the North East championship in 1969.

With the canoe club he qualified for the Canadian championships in Winnipeg in 1972.

Given his athletic skills and connection with the club, it was no surprise BBCH picked him up at the age of 20. When Browne first started playing hockey with the club there were only four teams, The Greens, The Blues, The Reds and The Whites.

Games were and still are usually played at Ted Reeve Arena, and Browne was a member of The Greens team for 27 years.

“We won the cup many times and had good teams always,” he said.

Browne won the club scoring title in a number of seasons, and remembered some of the many players he skated with over the decades.

“I had some great teammates like Paul Babich, Cy Crocker, goalie Avro Reiart,” he said. “Other ‘greats’ were the Golden God, Shack, Mully, Prosser, God, Bobby Dobby, Bakes, Fully. I had other great friends from childhood on some of the other teams like Ronnie Wright, Alex Kinninmont, the Grieve boys and more.”

Browne said that along with the hockey, the social aspect of being a member of BBCH was what made it really special.

“The Greens were famous for having a great dressing room. After the game it was a two-hour social until we shifted down to The Grover Exchange (now The Grover Pub on Kingston Road) for the duration of a Friday night.”

Browne played with The Greens until 2005, and then became a member of The Blacks team.

“The 2005/6 season I was playing for The Blacks,” he said. “It wasn’t quite like Gretzky leaving Edmonton, but I did have mixed emotions. I am now playing with some other kids I grew up with, Ron Blackmore, J.P. File, Duncan Hammond, Dave Norris and Bretzky to name a few. Another good hockey team with a great dressing room.”

As he got older, Browne also became involved with the Balmy Beach Old Boys, which was for players over the age of 35 and run by Paul Babich along with Jake and Red Lipsett. Balmy Beach Old Boys teams travel to oldtimers tournaments and take hockey tours around the world.

“I spent 10 fantastic seasons with them. I had the pleasure of playing hockey in Italy, Austria, Germany, Switzerland, Slovenia, Croatia, and the Czech Republic with side trips to Spain, Morocco and Holland,” said Browne.

“I can’t thank those guys enough for all the life experience I got from those trips.”

In 1992, Browne took part in a hockey Tour of England although that was not with the Balmy Beach Club.

Looking back, Browne said his hockey career from a kid in the Ted Reeve Hockey Association to BBCH, the fire department and tours of the world have been a pleasure and a gift.

“After 55 years of playing organized hockey, I have seen some amazing places and met some great people,” he said.

Browne’s connection to hockey will never be far away, though, as he will still be out at hockey rinks enjoying watching his teenage daughters Nici and Aimee play with the Scarborough Sharks Under-18 AA team.

“It gives me great pleasure to walk into a hockey rink and see my girls playing with a few tricks I have taught them. I’m glad that they really enjoy playing the game.”