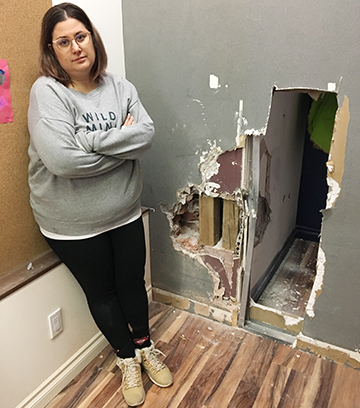 Amanda Munday, owner of the Workaround at Danforth and Woodbine, stands by the damage done to the childcare space during a break-in that took place last week. Photo by Alan Shackleton.

Amanda Munday, owner of The Workaround at Danforth and Woodbine avenues, is still struggling to understand why someone broke into their new childcare space late last week and started hammering away at structurally supporting brick pillar as well as damaging kitchen equipment and other items.

“Why? Why would you do this?” she asked on Monday as she stood among the damage inside the childcare centre located at 2086 Danforth Ave., just east of Woodbine Avenue.

The Workaround, which offers parent-friendly workspaces and support to working parents who need flexibility and often childcare services, has been operating at the northeast corner of Woodbine and Danforth since October of 2018.

Offering a childcare service to its clients has been one of the key ways that The Workaround has been able to help local entrepreneurs, especially women, juggle the demands of work and family.

They had just recently expanded one door east from the original location so that they could increase the number of childcare spaces they could offer, said Munday.

It was that new location, formerly Magicuts, that was broken into sometime between 9 p.m. on Thursday, Jan. 9 and 8 a.m. on Friday, Jan. 10.

The front door was pried open, and once inside, the culprits moved and damaged newly installed kitchen equipment for the childcare area and severely damaged a supporting brick pillar on the east side of the building.

The pillar and surrounding wall area had been struck numerous times by what appeared to be a sledge hammer, said Munday, causing significant damage. The extent of that damage to the pillar is being assessed by a structural engineer given that it has been deemed structurally important.

Adding to the confusion and frustration over the incident is that the new childcare space was slated to open on Wednesday, Jan. 15.

“We had just took over this space in mid November and were doing renovations. We were going to have a big grand opening on Jan. 15,” said Munday.

Along with the damage to the pillar and kitchen equipment, some of the toys the children would have been using at the centre were broken.

Munday said that police believe those who broke in were trying to smash through the east wall to get access to the neighbouring variety store.

“It’s the most logical theory in an illogical situation,” she said. “We have nothing valuable here.”

The expanded childcare location would have provided space for 15 children, said Munday.

As of now, The Workaround can only offer space for 10 at the existing location even though an extra staff person had been hired for the expected increase in the number of children this week.

“We have three staff for 15 kids, and we’re obviously not going to lay anybody off but this puts us in a difficult situation,” Munday said.

She is hoping that all will go well with the structural engineer’s report and that they can soon begin fixing the damage to the walls, and replacing the kitchen equipment and toys.

Munday added that since news of the damage became known, local residents and businesses have been extremely supportive with offers of help and donations of toys.

“That has been the positive part of this. Everyone is so supportive,” she said.

There are no descriptions of suspects involved in this incident.

For more on The Workaround on how it helps women entrepreneurs, please see our story at https://beachmetro.com/2019/04/18/women-entrepreneurs-celebrated-at-danforth-avenue-event/