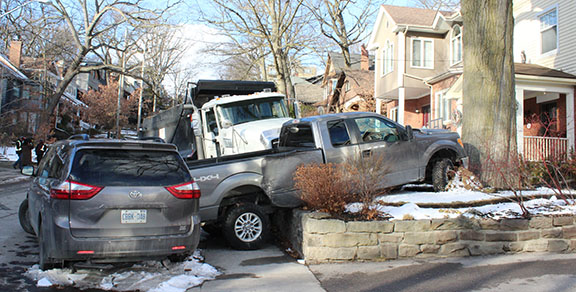 A dump truck hit three other vehicles on Scarborough Road, just north of Queen Street East, on Wednesday, Jan. 8, afternoon. A pickup truck was rammed into the front yard of a house on the east side of the street in the crash. No one was injured in the incident. Photo by Alan Shackleton.

No one was injured after a dump truck towing a large excavator lost control and crashed into three parked vehicles on Scarborough Road in the Beach on Wednesday, Jan. 8, afternoon.

The accident occurred at approximately 2 p.m., in front of a house on the east side of Scarborough Road just north of Queen Street East.

The large white dump truck, which had a trailer for an excavator, appeared to have slid down the incline on the road into the three parked vehicles.

A Honda SUV, a Toyota minivan and a Ford pickup were hit by the dump truck. The pick up was plowed onto the front yard of a home on Scarborough Road before being stopped by a large tree and a stone retaining wall.

Construction involving excavators was taking place on Scarborough Road a few doors north of the accident.

Police are in the early stages of the investigation and a commercial vehicle inspection unit was on the scene.