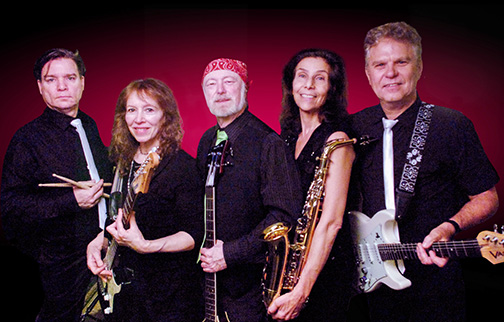 The Two Fours are staging their 100th Show Celebration Party this Saturday, Dec. 14, from 3 to 6 p.m., at Salty Dog Bar and Grill on Queen Street East in the Beach.

Along with The Two Fours’ good time rock and roots music there will be guest performers, free door prizes for many, and cake for all. Contributed from the Dulcinella bakeshop on Coxwell Avenue, the all-natural cake has no preservatives and will be decorated with The Two Fours logo.

“The community, including our fans, followers, and fellow musicians have been very supportive of us,” said Wally Hucker, co-founder of The Two Fours.

“Karen, Susan, and I wanted to thank them,” he added, referring to the other two members of the group’s ‘Key Three’ core, Karen Gold and Susan Litchen. “What better way with a party, music, dancing, cake, and gifts?”

The Two Fours chose to celebrate at Salty Dog, on the corner of Queen Street East and Waverley Road, in part because it is within a few blocks to the homes of all the ‘Key Three’ and many of their fans.

“We also wanted to thank Larry and Danny Papas,” said Hucker of the brothers who own Salty Dog. “They gave us our first real break, hosting a weekly Sunday open mic/jam when they operated Peppery Cat across the street.”

In all, the band played about 20 times at Peppery Cat and Salty Dog.

Because all the ‘Key Three’ are long-time Beach residents with strong community involvement, about 15 per cent of The Two Fours’ shows have been benefits, charitable, and community events such as Wheels On The Danforth, Music In The Park, and the Toronto Beaches Lions Easter Parade.

“We like giving back to the community which has been good to us,” said Litchen.

The Two Fours 100th Show Celebration Party is to give back to the community of fans, followers, and musicians who helped the band reach 100 shows in just three years.

In addition to music and dancing, the party atmosphere will be pumped up by free tickets for draws for door prizes.

Guest performers, and any guest who has played with The Two Fours (excepting current members) in one of their 99 previous shows, including their open mic/jams, will receive an additional draw ticket.

Prizes for this draw, as special thanks for their support, are a mounted and framed classic 45 RPM record from the band, a $50 gift certificate from Vistek, and an ukulele by Denver Guitars, valued at $110, from national music equipment retailer Long & McQuade.

Of special interest to east end musicians and budding musicians and their parents, Long & McQuade’s huge new retail and lesson centre is under construction on Danforth Avenue near Pharmacy Ave. It is anticipated to open about the beginning of March.

“It’s going to be a great afternoon,” said Gold of Saturday’s 100th show celebration. “Did we mention we’ll have cake for everybody?”