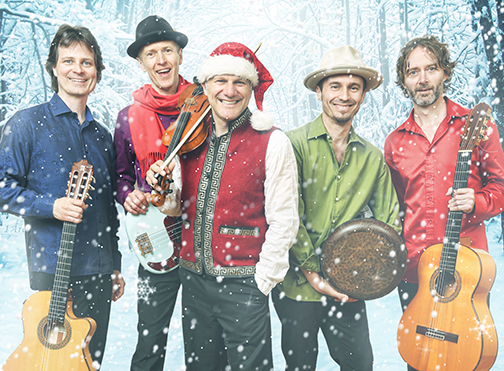 The Sultans of String Christmas Caravan concert will be performed at Kingston Road United Church on the evening of Sunday, Dec. 15. Photo: Submitted.

Three-time Juno nominated band Sultans of String will be returning to the Beach this holiday season as part of the Kingston Road Village Concert Series.

Sultans of String will be performing on Sunday, Dec. 15, at 7 p.m. at Kingston Road United Church, 975 Kingston Rd.

The band is currently on their Christmas Caravan fundraising tour for the United Nations High Commission for Refugees.

According to a press release, lead violinist Chris McKhool said that “helping refugees is a cause we care about deeply because more than 67 million refugees worldwide are in desperate need of our support. They have every right to live a safe and dignified life as much as we do.”

“Touring is the lifeblood of a band these days. It’s always great to play in front of new audiences and be able to perform our music,” said McKhool.

The band will be playing a medley of Christmas songs to celebrate the holiday season on Dec. 15, including Jingle Bells and Silent Night.

“We play everything from rumba flamenca from southern Spain to kitschy jazz from eastern Europe, Cuban rhythms, East Coast Celtic rhythms, and Arabic rhythms from my ancestors,” said McKhool.

“The Christmas Caravan show is a different kind of beast. Most people know us as an instrumental band, but there’s a lot of singing in this show. It’s really fun,” said McKhool.

McKhool, a former Beach resident for more than 20 years, said he’s looking forward to performing in his old neighbourhood because of his friends there and the community.

He also said that the Kingston Road United Church is an amazing venue to play and to hear live music.

“If you know people who have never been to a concert there before, you have got to tell them to go because it’s an amazing space. It’s beautiful, open, bright, gorgeous and sounds wonderful,” he said.

Tickets for the concert are available online for $25 at sultansofstringchristmas.eventbrite.com

For more information about Sultans of String and to stream their music, visit http://sultansofstring.com