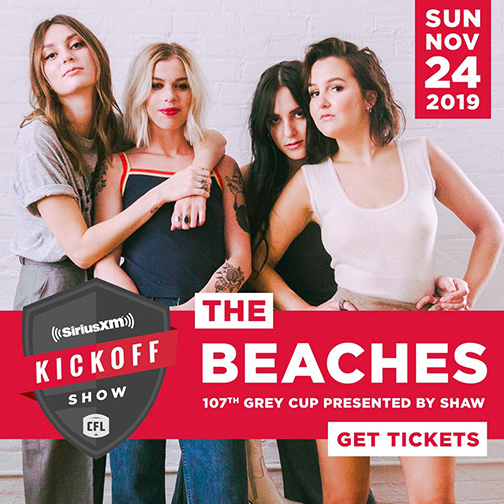 The Beaches will perform at the Grey Cup's Kickoff Show on Sunday, Nov. 24, at McMahon Stadium in Calgary.

Local band The Beaches will be playing at the 107th Grey Cup’s Kickoff Show on Sunday, Nov. 24, in Calgary.

Members of The Beaches are Jordan Miller, Kylie Miller, Leandra Earl and Eliza Enman McDaniels. The Miller sisters and McDaniels all grew up in the Beach.

”We’re kicking off the 107th Grey Cup in Calgary on November 24th !!!!! Gonna be crazy, gonna be cold, gonna be A TIME !!!,” said the band on their Facebook page recently.

The Beaches will be performing at the Sirius XM Kickoff Show at McMahon Stadium in Calgary prior to the opening ceremonies and kickoff for the Grey Cup, the annual Canadian Football League championship game.

For more information on The Beaches, please visit www.thebeachesband.com