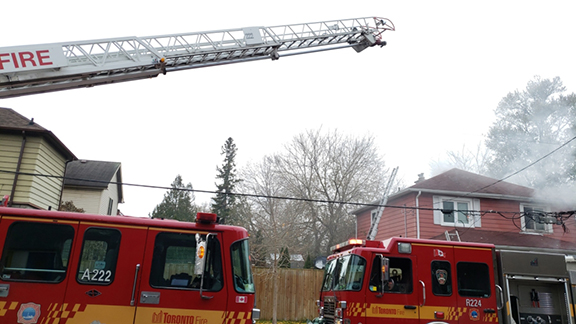 Two people suffered what are believed to be minor injuries as a result of a house fire on Secord Avenue in East York.

Toronto Fire Services were called to the scene at 37 Secord Ave. at 10:51 a.m. on Thursday, Nov. 21, by a passerby who spotted smoke coming from the second-floor of the semi-detached home and a man sitting on the the roof of the front porch.

When firefighters arrived, they set up a ladder and rescued the man from the roof. A second man in the house got out of the building on his own, said Toronto Fire media relations.

The two men were treated on scene for minor injuries and then transported to Michael Garron Hospital for further treatment. Firefighters were able to quickly get the fire under control and then vented smoke from the house, before going through it with thermal imaging cameras to ensure there were no hot spots.

A aerial ladder truck was briefly set up at the fire, which considered an Alarm Level 1 working fire, but it was not used to fight the fire as it did not escape the home’s interior.

The cause of the fire is not yet known and there is no estimate on possible damages.

EDITOR’S NOTE: This story has been updated from its original version to include more information.