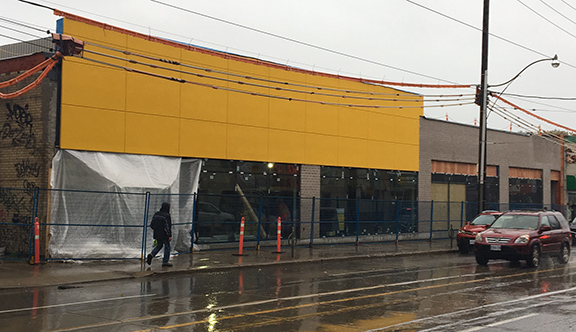 The rebuild of the Rocca's No Frills store at 269 Coxwell Ave. is nearly complete and the store will celebrate its grand re-opening on Thursday, Dec. 5. Photo by Alan Shackleton.

The Rocca’s No Frills store at 269 Coxwell Ave. will be officially opening in the first week of December.

“We’re excited to celebrate the grand re-opening of Rocca’s No Frills with the community on Thursday, Dec. 5,” Loblaw Public Relations told the Beach Metro News in an email this week.

More details on what the grand re-opening celebration will involve are still to be released, but customers who have been waiting for the return of their neighbourhood grocery store since May of 2016 will be thrilled to hear it will soon be a reality.

Rocca’s No Frills closed suddenly on May 11 of 2016 as the building was in need of urgent repairs.

The sudden closing left many customers without a grocery store they could easily access.

To take care of those customers, Loblaw Companies has been running a shuttle from the Rocca No Frills parking lot to Dave & Charlotte’s No Frills on Carlaw Avenue since the closure.

For a number of reasons, the renovation and rebuild work took longer than had originally been anticipated. When work first began on rebuilding the location, it was hoped it would be open again by the fall of 2018.

Since work began, the majority of the old store has been demolished and rebuilt.