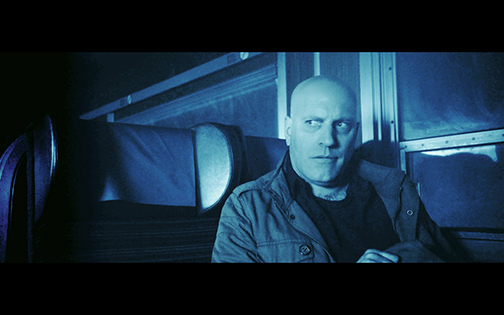 Gar Reid plays the role of a silent man in the film Willa, based on the short story by Stephen King. The 12-minute short film will be part of Blood in the Snow 2019 Film Festival set for this coming weekend. Photo: Submitted.

Gar Reid steps onto the set of horror flick Willa for the first time on a cold December evening. The ground is littered with prop train girders and drones buzz overhead.

With coffee in hand, Reid arrives in a flurry of action. His actor cohorts are disarmed by the mystery of his figure hidden in the juxtaposition of his dark eyes and a clean-shaved head that gleams under the rig lighting.

“None of the cast knew who I was,” Reid said. “Corey Mayne (director) asked me to come in and be this creepy guy.”

The singer-songwriter, and guitarist for local band Eclecticus was enrolled by his band manager and the film’s line producer, Jeremy Campbell, to play the villain Skinhead.

“It was more for his look,” Campbell answered over the phone after being asked why he picked Reid for the role.  “Gar had that perfect villain look on camera.”

“Who doesn’t want to be a villain in Stephen King film,” Reid responded, laughing.

Based on the short story of the same name by Stephen King, the 12-minute film features Canada’s up and coming stars.

Toronto has become a mecca of world-class crews, said Campbell, who has worked in the film industry here for more than 20 years.

The long-time Beach resident has seen what he describes as the growth, decline and regrowth of film in Toronto.

He was was taken aback at the family of the entertainment industry’s best who gave their time to work on Willa, which is being dubbed the biggest little film in Canada.

Eclecticus bandmate Tiina Lemay shuttled actors and crew members to and from Uxbridge where the film was shot, and describes the tenacity of the film family.

“To be a fly on the wall, and see these people work so hard for this wonderful independent film, was really inspiring,” she said.

With a long expression and wide eyes, Skinhead seeps into the folds of the audience’s deepest anxieties.

“It was tiring on the eyes,” Reid said about the lineless role that was written into the story by Mayne and Szeman.

“There were small movements you have to really work on, he said. “A glance is worth a thousand words.”

The next screening of Willa in Toronto will take place as part of the Blood in the Snow 2019 Film Festival slated for later this month. It will be playing at The Royal Cinema, at 608 College St. on Nov. 24, at 2 p.m.