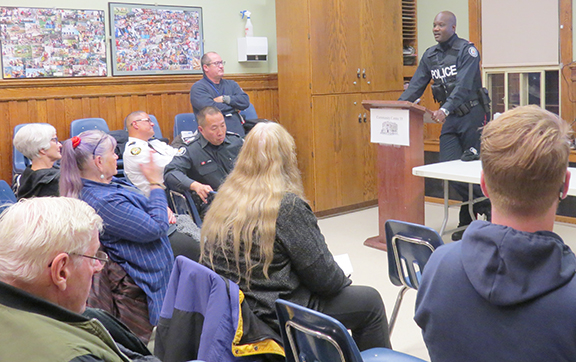 The meeting took place at Community Centre 55 on Main Street on the evening of Thursday, Nov. 7.

Strategies in line with a planned modernization of the Toronto Police Service were presented, along with tips for residents around crime prevention and internet safety.

Supt. Reuben Stroble told the meeting that the Neighbourhood Officer Program will be introduced in the Flemington Park, South Riverdale and Blake-Jones neighbourhoods.

The TPS program aims to strengthen relationships with the community by embedding two long-term community officers into these neighbourhoods.

“These are detailed community officers that can’t leave the community,” Stroble said.

These officers, he said, will get to know the kids and families in the respective neighbourhoods. Residents will also be provided with a direct line to their community officer, should they need assistance.

Designated officers, he said, will be trained in the cultural, language and gender sensitivities of their assigned community. Toronto police intend to station the same community officers in a neigbourhood for up to six years.

The biggest challenge, Strobel said, is incentivize an officer to stay in the same community for the stated period of time.

Neighbourhoods in Toronto also have a Community Police Liaison Committee consisting of residents and business owners who watch over the neighbourhood and serve as a line of communication between their respective neighbourhood and its corresponding police division.

Stroble said that officers rely on committee members to serve as an additional line of communication between the public. Both the Neighbourhood Officer Program and the Community Police Liaison Committee fall under a mandate called, The Way Forward, which aims to modernize police services and answer distinct community needs.

Other modernization initiatives include decreasing management, increasing frontline police staff and shrinking the number of stations from 17 to 10, which includes amalgamating the police stations for 54 and 55 divisions. The 54 Division station on Cranfield Road in East York officially closed its doors in December of last year, and combined operations for 54 and 55 divisions are now run out of the 55 Division station at Coxwell Avenue and Dundas Street East.

A new station for the division is slated to be located at Coxwell and Danforth as part of the city’s Danforth Garage revitalization project.

Stroble also presented an overview of the crime rate in the 54 and 55 divisions’ jurisdiction which borders the Don River on the west side to Victoria Park on the east, north to Eglinton and south to the Lake Ontario shoreline.

Notable statistics were major theft and break and enters, which were up by 25 per cent and 30 per cent, respectively, since the same time last year.

“Yesterday, we made an arrest of the individual we believe is responsible for the series of break and enters at O’Connor and along Danforth,” Stroble said in response to the significant uptick in break and enters.

In regards to major thefts, Stroble advises residents not to keep their car fobs near the front door, as thieves can intercept the signal.

“Most people come home and leave their keys by the front door,” he said. A much better idea, said Strobel, is to bring the fob further into the home and store it away from windows to prevent thieves from hacking the signal.

Assault is also up two per cent from last year, which Stroble attributes to parties that know each other, such as fights that break out in bars or cases of domestic violence.

Anyone interested in more detailed statistics can log on to the public safety data portal, which provides crime maps and occurrences, updated in real time.

Topics of discussion at the Nov. 7 meeting also included internet safety for high school students and safeguarding your home against thieves.

Const. Curtis Celestine advises parents to offer a cellphone to their teenagers as a “loan” so they can outline explicit rules for cellphone use.

Const. Richard Santos-Vincentino invited residents to contact him for a full security check in their home, free of charge.

Parking Supervisor Andrea Gunn announced that the unit plans to rely more on community feedback and complaints to guide ticketing and less on “green hornets” (parking officers who patrol the area).

Instead of calling, Gunn said that complaints, are now accepted in real-time at https://www.torontopolice.on.ca/core/immediate_parking_complaint.php.