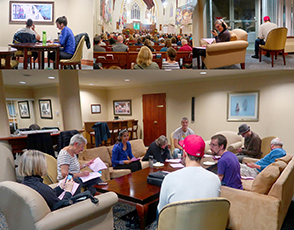 The Beach area is home to a chapter of a sophisticated and effective organization that works diligently to influence elections, politicians and public policy in ways that will protect our environment and promote clean energy and water policies.

The group is called LeadNow and I was invited behind the scenes on behalf of Beach Metro News to witness the group in action at a phone bank event in a secret Beach Triangle location, just prior to this year’s federal election in October.

LeadNow Ontario Organizer Tim Ellis said it was one of seven or eight such events held this year in different ridings around the Toronto area.

A phone bank is a gathering of concerned citizens who telephone people and talk about the issues and the candidates in the election. On it’s own such activities might not sound impressive, but they are part of a broader, well-organized plan.

LeadNow representatives meet in person with hundreds of candidates across the country and interview them about their plans for public policy related to the environment.

It supplements the personal interviews with written surveys completed by the same and additional politicians. It maintains a web site that contains all of this information, creates sustainability oriented riding breakdowns for use by its own team and by the public and provides an opportunity for politicians to make an on-record pledge to be a “Climate Champion” at cooperateforclimate.ca.

It undertakes analysis of these intentions against candidate polling, thus cross referencing the chances of an individual winning, and the consequent impact on greener policies.

LeadNow then divines a strategy. For example, for the federal election it made the assumption that there would be a minority government, and analysed whether particular candidates were likely to work across party lines on clean energy policy.

It determined in which ridings it made sense to vote strategically in a way to limit the damage of climate-denying candidates, and in which other ridings should a voter’s only consideration be to choose the greenest leader.

It then organizes thousands of volunteers across the country into about 150 regional teams. The teams work on influencing voters via the aforementioned phone banks, but also through ordinary door-knocking initiatives in strategically selected ridings.

It also organizes petitions and reports, which are submitted to various government bodies. It provides dates, times and locations to interested parties on political debate events.

Each activity is supported with modern tools including, pre-written scripts, persuasion training, and advanced phone dialing equipment that automatically weeds out unreceptive citizens, optimizing the time and efforts of volunteers.

Volunteer teams receive extensive training and they properly collect and organize data that makes the whole process work more smoothly. One software program makes it easy for volunteers to send letters to media editors when needed, including contact information for local entities, efficient submission tools, talking points, and so on.

LeadNow is a non-profit that was established in 2013. It is financed through its own fundraising
efforts, but does not accept contributions from corporations and does not receive government grants.

Because it engages voters on political issues it is subject to comprehensive reporting requirements, filing numerous detailed documents with Elections Canada and similar bodies.

BF Nagy is a long time Beach resident and author of a new book, The Clean Energy Age. He has interviewed more than 700 experts and written 180 articles on clean energy. The Clean Energy Age is available online, from your favourite bookseller or bfnagy.com. It contains expert solutions, success stories and top 10 lists of climate actions for homeowners, business managers, government people, and others.