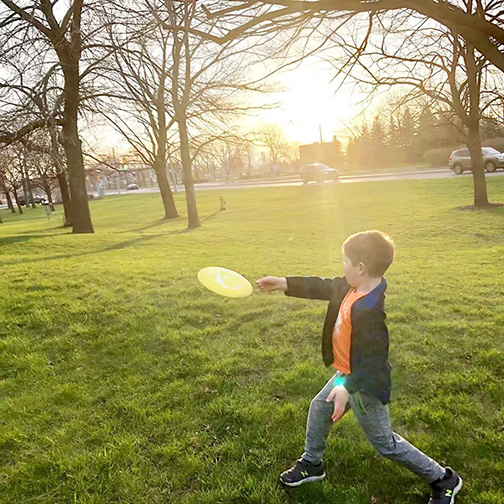 Jesper Starr-Smith enjoys a round of disc golf in Ashbridges Bay Park earlier this year.

Have you ever walked through Ashbridge’s Bay Park, and wondered what those metal posts with the chains on them were?

Perhaps you thought they were some sort of barbecue? Those odd-looking basketball nets are actually disc golf targets.

What is disc golf you ask?

“Disc golf is played similarly to traditional golf. Instead of using a ball and club, disc golfers throw a frisbee or a disc from a tee pad towards a basket, trying to get there in the fewest throws possible,” explained Jeffrey MacKeigan, Beaches Disc Golf Course organizer.

The person with the lowest score at the end of the course takes the win. It’s a sport you can play year-round and costs a fraction of what traditional golf does.

MacKeigan first learned about disc golf in the winter of 2014. He was mountain biking in the Don Valley Park when he came across a course behind the Ontario Science Centre.

“It seemed like a very accessible sport that was a fun thing to do outside,” he said.

In 2015, MacKeigan started looking into building an entry level course in his community. With the approval and support of the City of Toronto’s Parks, Forestry and Recreation, and nine designs later, they were ready to build.

Since its opening, the course has grown in popularity. It has created a community of all ages, who come out to enjoy the sport and the outdoors. In the winter following its opening, MacKeigan held a Beaches Bullet Blast tournament to encourage the disc golf community to come together. More than 50 people came out in -20 C weather to participate.

First place winners won a miniature version of the Leuty Lifeguard Station, and last place won a jar of pickles. People were trying to come in last place just to win the jars of pickles, said MacKeigan.

The Beaches Disc Golf community hold many different events at the course that are open to anyone interested in participating.

“Disc golfers take pride in the courses they play and host events to clean up the parks where courses are located,” MacKeigan said.

They are all organized through the Beaches Disc Golf Course Facebook page at https://www.facebook.com/BeachesDiscGolfCourse/

In August, MacKeigan resigned from his corporate job and started making changes in his life to better support the disc golf community. He now works as a professor at Centennial College, while also working with companies creating self-awareness / team building workshops and organizing the Beaches Disc Golf Course.

MacKeigan and his business partner Cara Hovius are currently working on building their second course in the West End of Toronto. The course will be similar to their current course. It will also be a nine-hole entry level course.

MacKeigan said he started this business to give back to the community, by giving them a place to come together, make friends and share their love of disc golf.