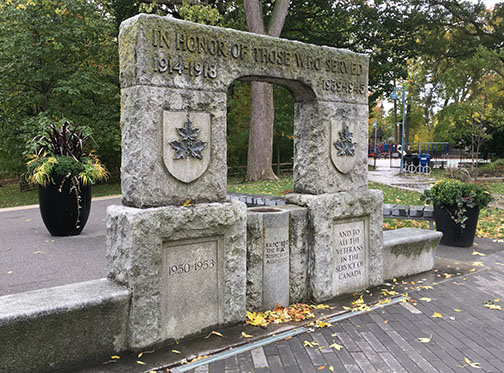 A Remembrance Day ceremony is set for Monday, Nov. 11, morning at the cenotaph in front of Kew Gardens on Queen Street East.

Remembrance Day ceremonies are planned for Monday, Nov. 11, at a number of local locations.

The sacrifices made by Canadians during the First and Second World Wars, the Korean War, peacekeeping missions and other conflicts will be honoured at local Remembrance Day services set for the Beach, East York and Scarborough on the morning of Monday, Nov. 11.

Remembrance Day is held at the 11th hour of the 11th day of the 11th month, as that is when the Armistice was declared to mark the end of the First World War which took place from 1914-1918 and killed more than 60,000 Canadian soldiers.

In the Beach, this year’s ceremony takes place at the Kew Gardens cenotaph on Queen Street East opposite Bellefair Avenue. It begins with a parade of veterans from Corpus Christi Church on Lockwood Road at 10:30 a.m. to Kew Gardens. The official ceremony at the cenotaph starts at 10:55 a.m.

In East York, the ceremony takes place at the East York Civic Centre’s Memorial Gardens, 850 Coxwell Ave., starting at 10;45 a.m. It will also be preceded by a parade of veterans down Coxwell Avenue ot the cenotaph in the gardens.

Southwest Scarborough residents can observe Remembrance Day at the Scarborough Cenotaph, at Kingston Road and Danforth Avenue, beginning at 10:45 a.m.