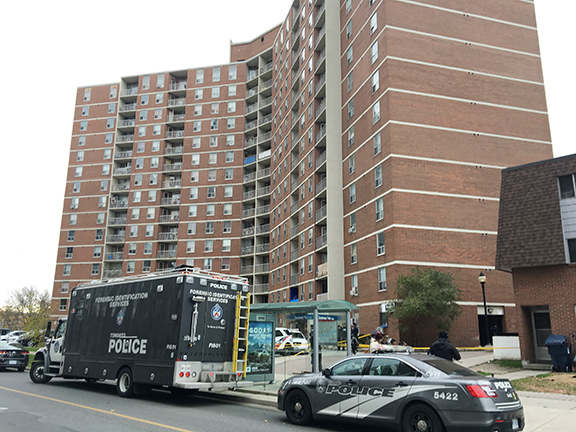 Toronto police are investigating after the body of a man was found in the stairwell of this apartment building at 75 Eastdale Ave. in East York on the morning of Nov. 5. The man was deceased when discovered and a shell casing was found nearby. Photo by Alan Shackleton.

Toronto police are investigating after the body of a man was found in the stairwell of an apartment building on Eastdale Avenue this morning.

Police were called to the building at 75 Eastdale Ave., just north of Secord Avenue in the Dawes and Danforth area, at approximately 4:50 a.m. on Tuesday, Nov. 5 for a report of “unknown trouble.”

When police arrived they discovered the body of who was deceased from an apparent gunshot wound. Police also found a shell casing at the scene, according to Toronto police’s Twitter account.

In an update to media at the scene today, police said the man had been shot to death and the homicide squad was taking over the investigation.

Police did not say how many times the man had been shot and did not release any information on suspects.

The victim is believed to be in his 20s.

Police are canvassing in the area for witnesses and video, and are asking anyone with information to please contact them at 416-808-5500 on anonymously at Crime Stoppers at 416-222-8477 or online at https://www.222tips.com

EDITOR’S NOTE: This story has been updated from the original version filed on the morning of Nov. 5 to include more information from police.