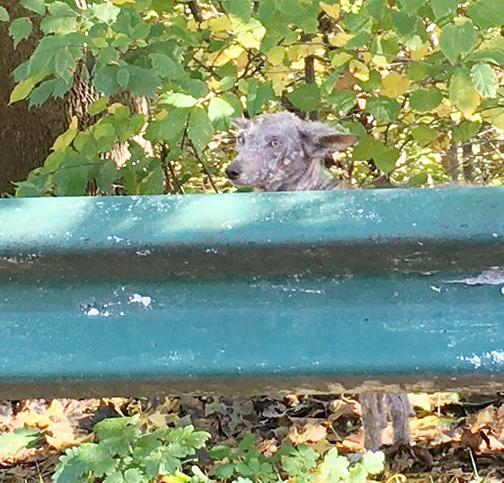 This coyote, appearing to suffer from mange, was spotted in the Glen Manor Road East area on Oct. 28. Photo by Kyle Wilson.

Residents in the Glen Stewart Ravine area of the Beach who spot a sickly looking coyote are asked to call the Toronto Wildlife Centre.

Nathalie Karvonen, executive director of the centre, said staff are aware of the coyote in the area and are trying to get it medical attention for what appears to be a case of mange.

Local resident Kyle Wilson took this photo of the coyote on Glen Manor Road East on Tuesday, Oct. 29. At first, he said he thought it was a dog.

Karvonen said what they really need from members of the public is calls from people who are looking at the coyote as they call in.

“We need active sighting calls from people who are looking at it in their backyard or driveway,” she said. “We need people to call us when they are seeing it. We don’t need people calling telling us where they saw it two days ago as that really doesn’t help.”

Karvonen said it is okay to call them and leave them a message if you spotted the coyote at say 8:45 a.m. that morning, but telling them you saw it the night before is of no help.

According to the City of Toronto, coyotes are generally not considered a danger to people but they can be to pets.

People are reminded to never feed coyotes and to always exercise caution around them.

Coyote sightings tend to increase in the winter months as they do not hibernate and are easier to spot once the leaves fall and foliage thins out.