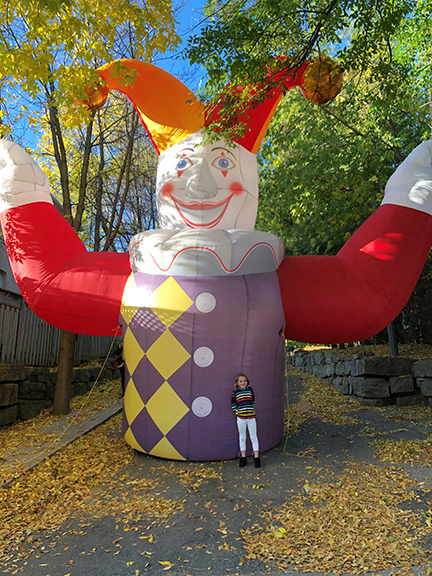 Giant inflatables will make up part of the Halloween display set for Edgewood Avenue, north of Eastwood Avenue, this Halloween night. Photo; Submitted.

The event will help raise funds for the Riverdale Collegiate Band’s 2020 trip to Europe, and band members will be helping by being an active part of the Halloween display which takes place on Edgewood Avenue just north of Eastwood Avenue.

“For the past five years, residents on the street have been coming together to raise money for a hyper-local charity,’ explained resident Laura Cochrane, who is one of the organizers of this year’s event.

This year’s display is themed All Things New Orleans/Mardi Gras and will include a scenic New Orleans cemetery, a Caribana dance group and the Riverdale Collegiate band performing New Orleans-style music.

Cochrane said that because that section of Edgewood is a private road, the residents who live there are able to close it off to traffic (except for emergency vehicles) to create an elaborate Halloween display.

“We have a really tight-knit neighbourhood, and everybody helps us,” she said of the 14-house street.

Cochrane has experience with her company LexPR Canada in creating large-scale media events, and others on the street have technical and artistic skills which they lend to creating the displays.

“Over the years it’s been growing in popularity,” she said. “Last year, we probably had a about a thousand people out of all ages, and 700 trick-or-treaters.”

Donations for the Riverdale band will be collected at the event and there will also be a raffle for prizes donated by a number of local businesses including Occasions restaurant on Eastwood Avenue. Other local businesses that support the event include DeClute Real Estate, Pizzeria Via Mercanti. The Swag Sisters Toy Store and Lazy Daisy’s café in Leslieville.

Along with the specific displays and entertainment there will also be 3-D projections on the houses facing Edgewood Avenue and a number of very large inflatables.

Events will be getting underway at 5:30 p.m. on Oct. 31. Even though the weather is not supposed to be very nice, Cochrane said they will have some tents to help keep visitors dry and encouraged everyone to come out and help support the Riverdale Collegiate Band’s 2020 Europe trip.