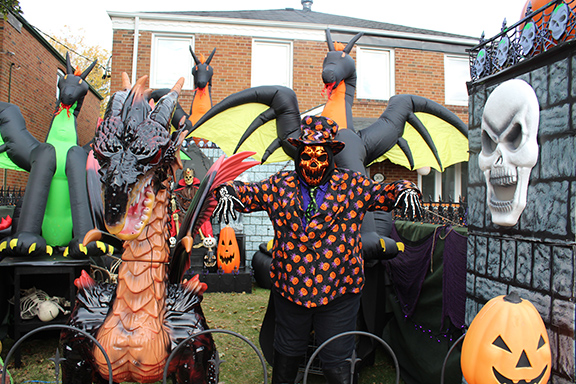 Krista Fortune is ready to welcome visitors to Castle Gerrard on Halloween night. The house, on the north side of Gerrard Street East between Kingswood and Bingham, has been site of the impressive display for many years. Photos by Alan Shackleton.

Protected by numerous dragons and ruled over by a skeleton on a throne, residents in the Upper Beach area can’t miss Castle Gerrard.

It’s grey “stone” walls and castle rooks rise up in front of the home on the north side of Gerrard Street East between Kingswood Road and Bingham Avenue, and traffic slows as cars pass by to take in the impressive Halloween display.

Valerie Fortune and her daughters Krista and Lisa have been putting up a Halloween display in front of the house for 19 years in a row. The past 15 years have seen the display grow as Castle Gerrard under the direction of Krista.

“After years of helping with it, I decided at the age of 18 that I would be in charge of Halloween,” said Krista.

Her main motivation was to make display to something more solid that could be installed year after year instead of having to come up with a new theme each year.

“We’ve changed it up a bit over the years,” she said. “I said we wanted to do something more solid, and why not make it a castle and from there it started.”

She added that Castle Gerrard is the perfect name for the display. “It’s pretty hard to miss,” she said.

The original castle walls were made with peg board and the rooks of styrofoam that was painted over, said Valerie.

“Eventually the pegboard rotted and the rooks were eventually eaten by raccoons and squirrels,” said Valerie.

Now it’s made of quarter-inch plywood and other lumber levelled, mounted, zip tied together and rock solid on the ground, said Valerie.

“It’s zip-tied within an inch of its life,” said Valerie.

Over the years they’ve had lots of volunteers help out putting the castle together.

“It’s between four and seven days of work to assemble,” said Krista.

The Fortunes are assisted in making the display even more impressive by their neighbours who allowed their front yard to be used for a number of inflatable dragons.

Along with loving Halloween, Krista and Valerie both said that it is the reactions of the people who come to visit on Oct. 31, and those driving by in the days preceding it, that make all the work worth it.

“There are now people who came here when they were kids, and they are bringing their kids now,” said Valerie. “It’s a great feeling, we are so honoured to be here,” said Krista.

“I like to see the kids reactions and give out treats,” she added.

Days before Halloween, local kids and their parents are often stopping by to check out the display and make their plans to visit on Oct. 31.

“The adults are really excited about it as well,” said Krista.

As construction of the castle begins and the inflatable dragons and skeletons start making their appearances, even the buses passing by slow down for passengers to take a look, said Valerie. While the basic theme of Castle Gerrard remains the same, the Fortunes do add new pieces such as inflatable dragons or other items each year.

“We have a super inflatable dragon and a new bone dragon this year,” said Krista.

Come Halloween Day, the Fortunes are expecting more than 200 visitors, and they do provide treats for them at their own expense. “There’s a cost to do it, and we are happy to take donations towards next year,” said Valerie.