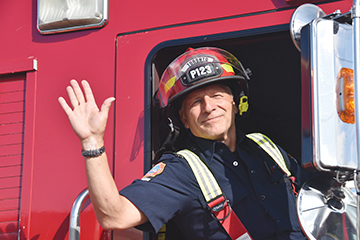 Long-time Beach resident Peter McAdam will be retiring next Tuesday, Oct. 29, after a more than 30-year career as a firefighter. Photo: Submitted.

Long-time Beach resident and firefighter Peter McAdam is set to retire after over 30 years of service.

“I guess regarding my career and life in the Beach and all this other stuff, I almost feel like I’m coming full circle in a way. I was born in Toronto and grew up in Willowdale, and became a Scarborough firefighter,” said McAdam, 64, who has been a captain for six years now.

McAdam started as a real estate agent, obtaining his license in 1979. Then he also broke into the film and television industry, first as an assistant cameraman and then started doing lighting instead.

In his real estate career, McAdam moved from residential to land sales and development. One day he received a call from a man wanting to build a housing division in Brampton, and it turned out that the man was a firefighter.

“I never really considered it until I met this Brampton fellow. I got to know him pretty well as we were going to look at properties across the region, and he said, ‘you know, you should look into becoming a firefighter,’” said McAdam.

McAdam put in applications to different fire stations in Ontario and accepted an offer at a Scarborough fire station.

“I look back on it and I think it’s the right move. It opened up a whole new world. I still remember recruit training. Here it is, the end of my career and it’s gone by in a blur,” he said.

McAdam spent time doing courses and absorbing information about his new career learning about hazardous materials and fire investigation. In 2010, he voluntarily served a term as the president of the Canadian Association of Fire Investigators before leaving the organization.

McAdam said the camaraderie between firefighters was a significant role of the job.

“Out of all the emergency services it’s based on teamwork, more than any other. Everything that we do, we do together. Every call, we go for gas, we go shopping for whatever it is,” he said.

McAdam said that he thinks the job has changed in a lot of ways since he’s been a firefighter.

“You used to have that old school hazing kind of thing. I think it’s much more professional. Today, it’s much more cohesive and reflects the city much more,” he said.

McAdam said that the best part of his job was the smaller calls that no one ever hears about.

“The ones that are gratifying is sometimes in a medical call you have the opportunity to restore someone’s heartbeat. And that is awesome,” he said.

“It’s nice to know that we made a difference in peoples’ lives for the better. We’re not just firefighters. I like to say that any uncontrolled situation is when you call 911 and we’re the first to show up. Doesn’t matter what it is. Whether it’s a fire or a flood, or car accident or heart attack.”

McAdam’s crew has lately transformed from a group of veteran firefighters to rookies.

“I hate to say goodbye, but I’ll be ready. I’m happy to leave it in their hands. With my recruit team, I feel like I’m leaving the job in good hands. I’m so blessed to have had a career as a firefighter,” he said.

As soon as McAdam retires, he and his wife Teresa plan on taking a long trip to first Hong Kong, then Thailand, Cambodia, and Vietnam.

“I couldn’t do it while I was working, so it was something that had to wait. We’re really looking forward to it.”

McAdam’s last shift will be on Tuesday, Oct. 29.