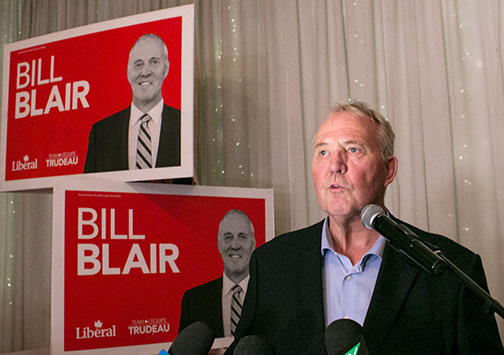 Bill Blair speaks to supporters on Monday night after being re-elected as MP for Scarborough Southwest. Photo by Kaitlyn Smith

Scarborough Southwest incumbent Liberal MP Bill Blair was re-elected in the riding with a sweeping 57 per cent of the vote in yesterday’s federal election.

During his victory speech at QSSIS Banquet Hall at Kingston and Markham roads in Scarborough on Monday, Oct. 21, night, Blair thanked local voters for their confidence and support.

“It’s an extraordinary community,” says Blair, with his wife, Susan Blair, standing by his side.

“I feel like they’ve given me a strong mandate to continue working over the next four years for this community.”

Prime Minister Justin Trudeau will return to Parliament Hill and the Liberals will organize a minority government after winning 157 of the 170 seats needed to form a majority leadership.

“I think there will be challenges,” Blair said when asked how he and his party will deal with foreseeable roadblocks related to forming a minority government. “I am confident we will find people to work with.”

In his own speech in Montreal, Trudeau reflected on Canada’s vote. “I have heard you my friends,” Trudeau said. “We will make life more affordable. We will continue to fight climate change. We will get guns off our streets and we will keep investing in Canadians.”

Climate change, gun control and progressive politics topped the Liberal party’s campaign platform this federal election. And, for the first time in history, millennials constituted the largest voter bloc in a federal election. According to Abacus Data, the number of millennials eligible to vote outnumbered even the baby boomers.

Blair’s Field Manager, Duncan Tooley, said the Liberals’ progressiveness is what attracts young people. In an interview after the victory party, Tooley, who is 25, smiled about his time with a diverse group of youth from high school to university students, logging long hours and knocking on doors for the campaign in Scarborough Southwest.

“Campaigns are a slog. They’re difficult,” said Tooley, who had entered the banquet hall earlier hugging every member of his team in congratulations.

“You’re out every day, and sometimes it doesn’t always go well, but definitely I’ve met some life-long friends here.”

When asked about the swarm of young faces on his campaign team, Blair said, “This election was really about the future and young people have the greatest stake in it.”

“If we are going to take effective action on climate change, they have the most to lose, and so they should be involved,” Blair added.

Fawcett Smith is a decorated Officer in the Canadian Armed Forces and the first Canadian woman to serve in a war zone with a prosthetic leg.

McCrady is an educator, with a commitment to Indigenous people in Scarborough-Southwest where the largest population of Indigenous people live in Toronto. He has fostered over 30 children and received awards for his work with vulnerable youth.

Earlier on Tuesday, Oct. 22, morning MP Blair tweeted his thanks to the community of ScarboroughSouthwest and his campaign volunteers at https://twitter.com/BillBlair/status/1186666717742862338

According to Elections Canada, with all 196 polls reporting in here are the final results of the voting in Scarborough Southwest:

In second was Conservative Kimberly Fawcett Smith with 10,421 votes (for 20.8 per cent of the vote).

In fourth was  Green Party candidate Amanda Cain with 2,428 votes (for 4.8 per cent of the vote).

In sixth was Simon Luisi, of the Animal Protection Party of Canada, with 233 votes (for 0.5 per cent of the vote).

According to Elections Canada, there were 78, 246 registered voters in Scarborough Southwest and 50,106 of them cast ballots for a voter turnout of 64.04 per cent.