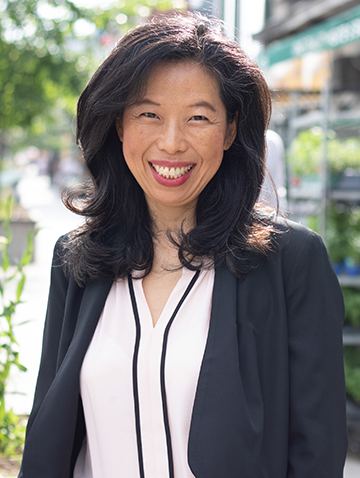 Min Sook Lee is running for the NDP in this month's federal election in Toronto-Danforth.

I live in this riding with my partner John who is a film carpenter member of IATSE local 873, and our two young children. I know it’s time for Canada’s Green New Deal – to take urgent action on climate crisis – action that matches the scale of the problem. We need to pivot away from fossil fuels and invest in renewable energy with a commitment to good union jobs, racial justice and Indigenous sovereignty.
Let’s set Canada’s agenda for change here in Toronto-Danforth, the riding that catapulted Jack Layton onto the national stage. I met Jack as a teenaged activist and I’m proud to build upon the work that Jack led.
I have been active through my life from the anti-apartheid movement, queer women’s communities, labour-arts, and alternative media organizations. My documentaries have helped changed laws on migrant worker rights in Canada. As a faculty member of OCAD U, I teach Art & Social Change.

Gun violence has impacted the lives of many friends and community members here in Toronto-Danforth. Most recently, the terrible violence of the Danforth Shootings has made our entire riding united in our commitment to fight gun violence.
As Jack Layton once said, there is no reason for anyone in Toronto to have a handgun or assault weapon. I support a handgun ban here in Toronto, and the NDP would provide the authority to any municipality to ban them. Our approach must be comprehensive, immediate and substantial.
But gun violence must be addressed by more than bans. There is a correlation between gun violence and poverty that is undeniable – there is no solution to gun violence without addressing the root causes.

For many people climate change is a huge issue and it feels overwhelming. In fact, some feel despair. But we can have a huge impact locally. For example, we can have a transit strategy that better serves our needs by reducing our dependence on cars.
We are the only country in the OECD that doesn’t have a National Transit Strategy. The TTC needs adequate and predictable long-term funding to plan appropriately. Another way we can localize our response to climate crisis is to support housing retrofits. Homes and buildings are a core source of emissions in cities. Taking leadership on these issues will create new jobs, provide realistic opportunities for our neighbours to play their part in fighting climate change.

You’ve asked for two, but I actually think there is three: Climate change, affordability and electoral reform.
This election is our chance to finally elect a government that follows through on its commitments –to build 500,000 desperately needed affordable housing units; to improve health care for millions by introducing pharmacare and dental care; and for democratic reform, so this election is really the last, first-past-the-post election.
And more than anything, this is the election to finally acknowledge and address the climate crisis.
I will fight for more aggressive emissions targets; for an end to fossil fuel subsidies; and for concrete steps to build the green, renewable energy that will reduce and eliminate our reliance on oil and gas and create 300,000 good, clean union jobs.