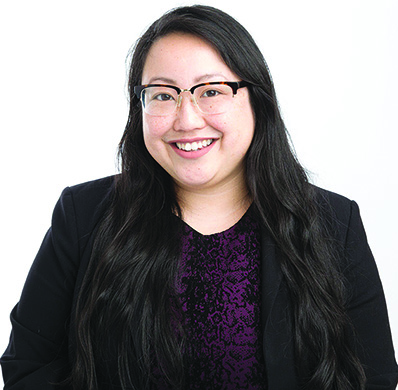 Mae J. Nam is running for the NDP in Beaches-East York in this month's federal election.

I didn’t plan to be a politician, but I know that our country needs strong voices to battle the climate crisis and income inequality. I’m running because I know we can do better.
I paid my way through McGill as a grocery cashier, while volunteering as a community organizer, co-founding the Philippine Women Centre of Quebec. Since then, I’ve worked as a lawyer, championing human rights. I’ve dedicated my legal career to fighting for fairness and justice and I’m ready to bring that fight to Ottawa. You can count on me to stand up for services that Canadians can rely on, like universal pharmacare, affordable housing and affordable child care.
On a personal note, I love living in Beaches—East York. You can find me volunteering, playing music with my band, and canoeing on Lake Ontario. I live with my partner, Jesse, and our dog, Banksy.

I’m proud that Jack Layton’s New Democrats were the first to call for powers for municipalities to ban handguns and to remove assault military weapons from our cities in 2008. Our position remains the same: an NDP government would support a municipality’s decision to ban semi-automatic weapons and handguns if they so choose.
We’re also committed to making sure that our young people feel like they have options and a future – preventing violence in our communities. We’ve committed to investing $100 million to fight poverty and create opportunities for young people.

Toronto has an affordability crisis, and we’re feeling it here across Beaches—East York.
Housing is expensive for renters and those looking to buy their first home. The NDP will build 500,000 new units of affordable housing, and kick-start the construction of co-op housing. We’d also make it easier for first-time home buyers, doubling the Home Buyer’s Tax Credit to $1,500, and allowing first-time buyers to access 30-year mortgages, making monthly payments more affordable.
I also hear from new families struggling to find child care. Families who do find a space face astronomical bills, and I hear from people who have taken out lines of credit to pay for child care.
Every parent should be able to find the child care they need, when they need it. We’re going to create 500,000 affordable child care spaces as we as we work towards establishing a universal child care system by 2030.

We have to do much, much more to fight the climate crisis. That’s why I’m running.
We’ve had decades of consecutive Liberal and Conservative governments who have failed to adequately address this crisis. Justin Trudeau declared a climate emergency one day, and the very next day approved a pipeline. Our plan to fight the climate crisis is ambitious and ensures no one is left behind. We’ll create 300,000 good, green jobs, and invest in clean energy projects and public transit.
Canadians treasure our public health care, but Liberal neglect and Conservative cuts are hurting the services we rely on.
People are making impossible choices when it comes to affording the health services they need – deciding between prescriptions and groceries, or cutting their pills in half.
We’re going to build on Tommy Douglas’s legacy, investing in dental care, vision care, mental health care, and universal pharmacare.