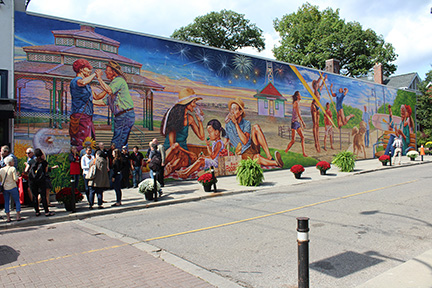 The mural on the east wall of the Beach Foodland store at Queen Street East and Lee Avenue was officially unveiled on Sept. 26. Photo by Alan Shackleton.

Artist John Kuna was joined by representatives of the Beach Foodland store, Mural Routes, the Beach Village BIA and local politicians for the unveiling of the new mural on the east side wall of the grocery store on the northwest corner of Queen Street East and Lee Avenue recently.

The unveiling took place on Thursday, Sept. 26, and also saw a large number of local residents to officially welcome the new mural to the neighbourhood.

The new mural replaces an earlier work of art called Beach Got Rhythm that was painted by Rudolf Stussi and his son Errol in 2007. That mural had to be removed in November of 2018 due to cracks in the wall that had made it unsafe.

Beach Foodland owner Nick Kyriacou said the store was thrilled to have been able to have the space once again painted with a mural that celebrated the community.

“This is an important symbol of our community and preserves our cultural heritage and celebrates the neighbourhood we live in,” he said at the unveiling.