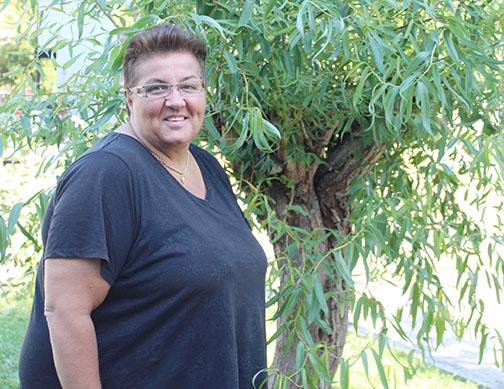 Vicky Tsorlinis is the 2019 Beach Citizen of the Year. She will be honoured at a special ceremony on Saturday, Sept. 21 at 12:45 p.m. at the Millennium Garden in Woodbine Park. Photo by Alan Shackleton.

The 2019 Beach Citizen of the Year is Vicky Tsorlinis.

She will be honoured at a special ceremony on Saturday, Sept. 21 in the Millennium Garden in Woodbine Park starting at 12:45 p.m.

Tsorlinis was named the 2019 Beach of Citizen of the Year for her formidable volunteer work and charity fundraising efforts on behalf of numerous local organizations.

Tsorlinis began volunteering when her children started at Malvern Collegiate as a way to be involved in the life of the school. She was treasurer of the parent council for nine years, and initiated numerous fundraising activities to benefit not only the school but also groups in the community in need of support.

“I was a Grade 9 parent and I wanted to get involved,” she told Beach Metro News in an interview.

It started with craft sales for Malvern C.I., and now her fundraising work has expanded to include not only the craft sale events but also book sales.

Once her children, Isaac and Phebe, graduated she stayed involved in volunteering and fundraising because she was good at it and there was a need in the community.

Tsorlinis can’t even begin to estimate how much money she has raised over the more than two decades she has been involved in helping out local groups, but said that on the past 57 book sales alone it has been approximately $56,000.

She said supporting local organizations is a key criteria of the fundraising efforts.

“It’s important to support our grassroots organizations,” she said. “Those are the ones that really need it.”

Some of the organizations her fundraising efforts have supported include Blake Boultbee Youth Services, Community Centre 55, the Red Door Shelter, Emily House, the Philip Aziz Centre for Hospice Care, Hospice Toronto, and Sanctuary Toronto which primarily helps the homeless.

Tsorlinis said she puts in about 25 hours a week on her volunteer work, balancing that with her fulltime job managing a downtown dental office which she has been doing for 34 years.

“It can be a lot of work, but a lot of it can also be done at home and I have a strong presence on Facebook which also helps,” she said.

She most certainly does not consider volunteering a chore at all. It’s something she loves to do as it helps others, and believes it is a key part of being a good community member.

“Volunteering is the norm for my family,” she said of her children and husband John. “Not volunteering would be the exception.”

Tsorlinis said that for the book sales, she makes sure all the books being sold are clean and in good condition, which often means bags and boxes of books at her home. “I pick up and sort all the donated books, make sure they are organized before the sales.”

The book sales take place at a number of locations including the Shoppers Drug Mart on Queen Street East in the Beach.

Tsorlinis said she was thankful to pharmacist/owner Maria Nenadovich for her support of the sales. She said she also appreciated the support of longtime Beach resident Gene Domagala, who often brings her a coffee and a bagel when she is at the book sale booth.

She said she was shocked when told she had been named 2019 Beach Citizen of the Year, as she was not doing the volunteering and fundraising to earn personal accolades.

“I was watching Coronation Street when I got the call, and I was speechless…just shocked,” said Tsorlinis. “I consider it such an honour given so many of the wonderful people who have already been given it in the past.”

First presented in 2001, the Beach Citizen of the Year Award was founded by Community Centre 55, the Beaches Lions and Beach Metro News.

For more information on the Beach Citizen of the Year award, please visit www.beachcitizenaward.org.