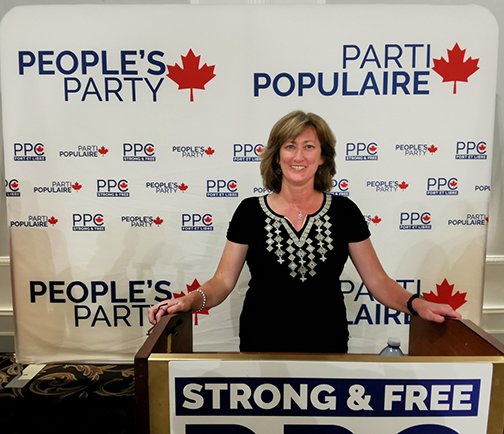 Deborah McKenzie is the People's Party of Canada candidate for the riding of Beaches-East York in this fall's federal election. Photo: Submitted.

The People’s Party of Canada will host a campaign kick-off event to help voters in the riding of Beaches-East York meet their candidate, Deborah McKenzie, for this fall’s federal election.

A resident of the Beaches-East York riding, McKenzie joined the People’s Party of Canada for a number of reasons including her belief in “the need to support the only federal party standing up for the right of Canadians to have freedom of speech. This is the fundamental right from which all our other rights and freedoms flow. Free speech can be messy and at times ugly, but it is essential to maintain a free and vibrant society.”

McKenzie is one of five candidates presently known to be running for the Beaches-East York seat in the federal election which takes place on Monday, Oct. 21.

Along with McKenzie, Liberal incumbent Nathaniel Erskine-Smith, who won the seat in the 2015 federal election, Mae J. Nam, of the NDP,  Nadirah Nazeer, of the Conservative Party, and Sean Manners, of the Green Party, are also seeking the seat.

For more information on the Sept. 20 event to meet McKenzie and launch her campaign, please visit https://www.facebook.com/events/2330287460527361/?ti=icl or https://www.beacheseastyorkppc.ca/