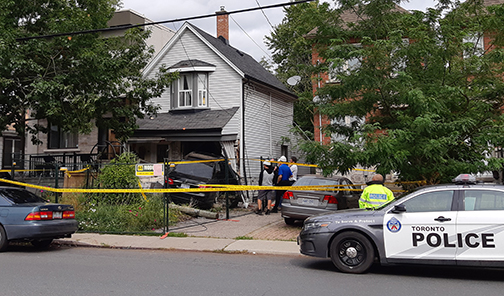 Toronto police are investigating after a car crashed into a house at Lumsden and Chisholm avenues early on the morning of Sunday, Sept. 8. Photo by Melinda Drake.

Toronto police are continuing their investigation and asking for the public’s help as they look into an incident in which a car crashed into an East York house early on the morning of Sunday, Sept. 8.

The incident took place at approximately 4:16 a.m. on Chisholm Avenue at Lumsden Avenue.

The black Mercedes was reportedly heading east on Lumsden when it failed to negotiate a sharp curve and crashed into the Chisholm Avenue house which faces the intersection of the two streets.

Police are investigating the incident as a fail to remain as the driver of the Mercedes reportedly fled the scene.

However, according to reports, a man later showed up in hospital with injuries from the accident. The driver was reportedly interviewed by police later Sunday morning, but there has yet to be an announcement on whether any charges will be laid.

Toronto police traffic services are investigating, and are asking anyone with home surveillance footage or dashcam video to contact Det.-Const. Scott Matthews at 416-808-1900 or to leave a tip anonymously at Crime Stoppers at 416-222-8477.