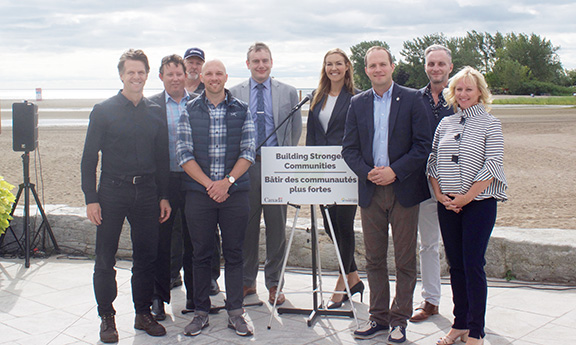 Beaches-East York MP Nathaniel Erskine-Smith was joined by Toronto Region and Conservation Authority chair Jennifer Innis, Beaches-East York Councillor Brad Bradford, and Moranne McDonnell, director of restoration and infrastructure for the TRCA, and others for the announcement of federal funding for flood and erosion control in Toronto at press conference Wednesday, Sept. 4, morning at Woodbine Beach. Photo by Amanda Gibb.

The Government of Canada is investing more than $33.7 million through the Disaster Mitigation and Adaptation Fund (DAMF) to protect 10 kilometres of Toronto’s Lake Ontario shoreline.

The City of Toronto is contributing more than $50.6 million, and the Toronto Waterfront Erosion Hazard Mitigation Project will rehabilitate 80 structural assets from Etobicoke to Scarborough.

The funding comes as part of the federal government’s $2 billion 10-year program to help communities across the country build infrastructure to withstand natural hazards like floods, wildfires, droughts, and earthquakes.

The goal is to make Toronto’s shoreline more resilient to erosion risks and increased flooding events as a result of intensifying weather events and climate change.

A press conference was held at Woodbine Beach on the morning of Wednesday, Sept. 4, to announce the details of the project.

Beaches-East York MP Nathaniel Erskine-Smith made the funding announcement on behalf of Françoise-Phillipe Champagne, Minister of Infrastructure and Communities.

Also in attendance were members of the Toronto and Region Conservation Authority (TRCA) including Jennifer Innis, the chair of the board of directors, and Beaches-East York Councillor Brad Bradford.

“We’re lucky to have the waterfront and we know that we need to protect our waterfront. In 2017, we saw record high water levels. This year was even higher and for a longer period of time,” said Erskine-Smith

“We have already increased flood risks. We have climate change that presents even larger flood risks going forward.”

“Again this year, flooding along Toronto’s waterfront is consistently and increasingly a significant concern and leaves behind serious erosion damage to communities, infrastructure, trails, parks, and more. Severe weather has also been a concern,” said Innis.

“Managing the risks associated with hazards of erosion is one of the primary roles of the TRCA. The TRCA fulfills this role by identifying and monitoring these hazards and stabilizing affected areas across the watersheds in the Toronto region,” she said.

Innis said this will protect these spaces for the safety and enjoyment of visitors, and will be designed to provide aquatic habitat benefits where possible.

“These investments that are being made today, the work that TRCA is doing, and certainly the money that the City of Toronto is putting towards this is really, really crucial in preparing for a changing climate, adapting to these increasingly frequent weather events, and building a more resilient, stronger waterfront community,” said Bradford.

He also said that the City of Toronto and Beaches East-York is fortunate to have strong partners at the federal level recognizing the importance of investments like this project.

For more information about the DAMF and the Toronto Waterfront Erosion Hazard Mitigation Project, please go to  https://trca.ca/conservation/erosion-risk-management/restore