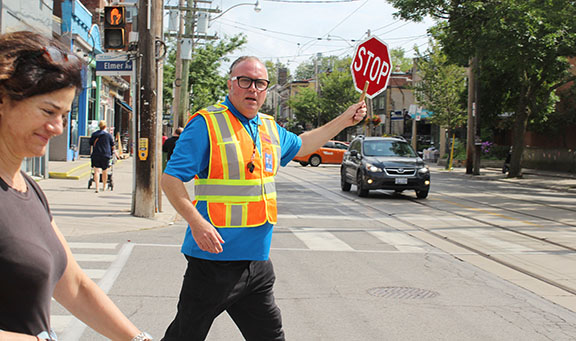 Crossing guard Paul Belyea is back at the intersection of Queen Street East and Elmer Avenue in the Beach. Inset photo, local students welcome Belyea back on Tuesday, Sept. 3. Photos by Alan Shackleton.

Everybody was happy to see crossing guard Paul Belyea back at his post at Queen Street East and Elmer Avenue on Tuesday. The students, the parents, local seniors, neighbourhood business owners, drivers, and even the dogs.

Belyea had worked the intersection as the crossing guard for Kew Beach Junior Public School from 2015 to February of this year, at which time he was transferred to become a crossing guard trainer and to work a different intersection in the west end of the city.

However, he was back at lunch time on Tuesday, Sept. 3, working his familiar intersection and it was a literal parade of people stopping in surprise, smiling and then welcoming him back.

“He gets on great with all the parents and the kids. Everybody knows him,” said Wally Stelmach, who along with his wife Gail, was happy to see Belyea back.

“He talks to everyone and he knows all the kids,” said Gail. “He’ not a robot like some people; he’s involved and friendly. It’s nice to have someone out there who knows everybody.”

Along with being a much loved crossing guard at Queen and Elmer, Belyea is also now director of training for Carraway Safety, one of the two companies that have taken over running crossing guard services for the City of Toronto. The crossing guard program had previously been run by the Toronto Police Service.

Belyea said working the intersection is literally like going home for him as he grew up on Kippendavie Avenue and attended Kew Beach Public School.

“This is a great day to be back,” he said as drivers passing by slowed down, honked and waved to him. “I had wanted to get back here from the time I left, and thought why not go home.” And while it was all smiles and high fives during the lunch hour on Tuesday, Belyea took time to say that there are many important aspects to the job of crossing guard that perhaps not everyone realizes.

“We call it being crossing safety ambassadors, and that means we are a part of the community,’ he said.

Belyea gets to know the names of the students, the parents and their pets. “Always carry dog treats,” he said of his popularity with the neighbourhood’s dogs, a number of which he greeted by name on Tuesday.

He said as part of his training sessions, he emphasized the importance of being friendly. “Start with a smile. It’s a positive emotion and can make such a difference in a person’s day. Also, look people in the eye and acknowledge them when you are talking to them.”

While Belyea works hard to keep everybody happy at his intersection and in the surrounding area, he said that as traffic increases and people’s live get more busy so do our streets get more dangerous.

On Monday morning, Belyea was at a road safety event at Oakridge Public School in Scarborough that included Mayor John Tory, and he said the message of looking out for others was an important one especially as it pertains to drivers.

“The mayor said slow down, plan ahead and stop looking at your phones,” said Belyea. “We all have this in our own power to make the roads safer. There used to be a social contract and everyone was paying attention and caring for others. That does not seem to happen as much now.”

He pointed out that intersections with crossing guards have lower numbers of accidents because they do indeed force people to pay more attention and to slow down.

“We have to be present, be aware and be the eyes and ears,” Belyea said of crossing guards and their key role in both road and community safety.