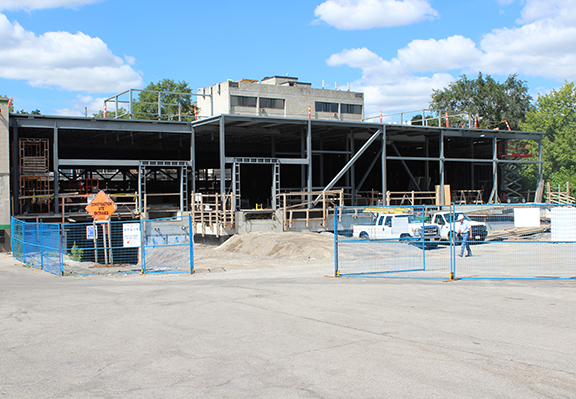 Construction of the Rocca No Frills on Coxwell Avenue is moving along well as this photo taken last Thursday from the east side of the building shows. The store is expected to be open by the end of this year. Photo by Alan Shackleton.

A new Rocca’s No Frills grocery store on Coxwell Avenue appears well on its way to being open by the end of this year.

“We’re still planning to have the store open and servicing this great community by the end of the year,” said Loblaw Companies in a statement sent to Beach Metro News in late August.

The store closed suddenly in May of 2016 leaving many residents who depended on it in the lurch.

To take care of those customers, Loblaw has been running a shuttle from the Rocca No Frills parking lot to Dave & Charlotte’s No Frills on Carlaw Avenue since the closure.

Rocca’s No Frills announced on May 11 of 2016 that it was closing immediately as the building was in need of urgent repairs. Since that time, the majority of the old store was demolished and the rebuild has been taking place.