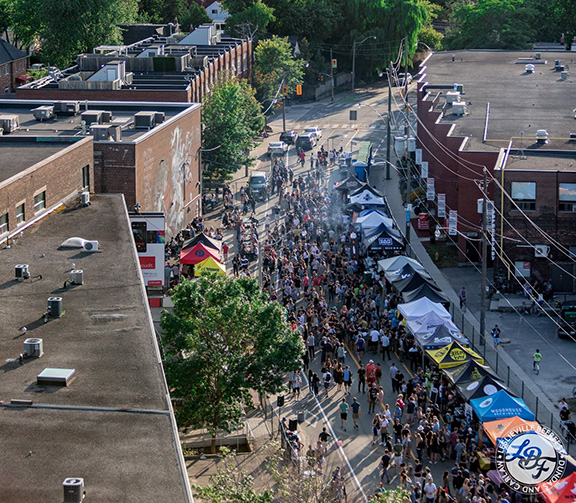 The Leslieville Beer Festival will close Dundas Street East between Carlaw and Logan avenues for a street party on Saturday, Aug. 24.

The Leslieville Beer Festival will shut down Dundas Street East from Logan to Carlaw Avenues on Saturday, Aug. 24 for a street party.

This year’s festival will feature more than 20 regional brewers, and over eight exhibitors including Arts Market, Boozer, and Society of Beer Drinking Ladies to name a few. The event will also feature local food vendors and artisans.

“There’s a bunch of cool local vendors that we target. It would be easy to get a bunch of vendors from outside the neighbourhood. That’s not hard, but we want to support local,” said co-founder Ruben Vina.

Vina started the festival on the patio of his bar Dundas & Carlaw in 2014. With the help of Toronto-Danforth Councillor Paula Fletcher, the Leslieville Beer Festival has been taking over a portion of Dundas Street East every year since 2016.

“We figured hey, let’s have a party and make it kind of a community street party. There’s something fun about partying on the street,” said Vina.

One ticket for the event is $25 and includes three beer sample tokens as well as a commemorative sampling mug.

Tickets can also be purchased at the gate the day of, but quantity is limited. Children and dogs are welcome.

For more information on vendors, sponsors, and FAQs, visit http://www.leslievillebeerfest.com/.