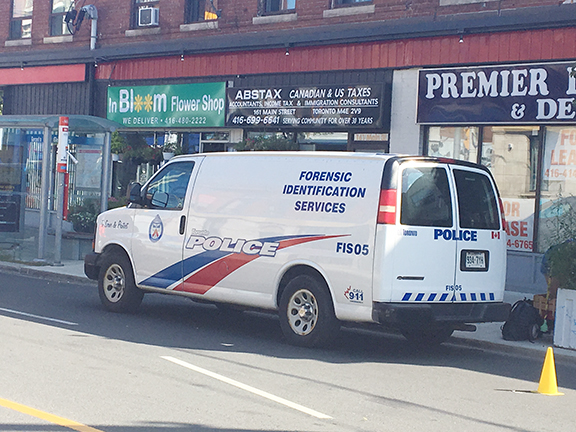 A Toronto police Foresnsic Identification Services truck was on scence at the S Market at Main and Gerrard streets Thursday morning. Five men robbed the store at approximately 4:30 a.m. on Aug. 15. No one was injured in the robbery.

The S Market at Main Street and Gerrard Street East was robbed on Thursday, Aug. 15, morning.

The robbery took place at approximately 4:30 a.m., and no one was injured in the incident.

Owner Amer Kal was not present at the store at the time of the robbery, but his night shift employee was.

“Five men walked in, four black, one white. One was over thirty, the rest under twenty, and they had a gun and a kitchen knife,” Kal told Beach Metro News in an interview this morning.

Kal said that a fire truck passed by with its siren on during the robbery, and it scared off the robbers.

“They were scared because they heard the noise of the fire truck, and they ran,” he said of the robbers.

He said that cash was stolen from the register, but no other items were stolen.

Police were on scene at the store Thursday morning, including a Forensic Identification Services truck.

Here is a video of the robbery: