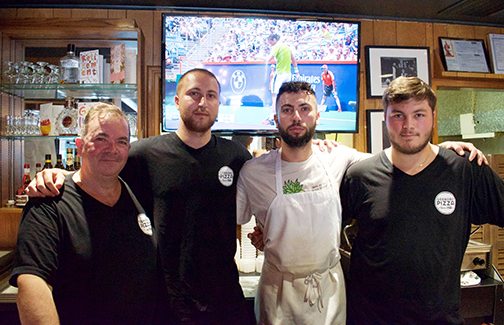 From left, Vito Greco, Matteo Imbrogno, Gianluca Imbrogno and Giuseppe Greco at Gerrard Pizza on Thursday afternoon. The restaurant, which has been around since 1966, will be closing on Saturday, Aug. 10. Photo by Amanda Gibb.

Gerrard Pizza will be permanently closing its doors this Saturday, Aug. 10, after serving Italian cuisine to the East Toronto community since 1966.

“It’s just time. You know, 53 and a half years of doing this and it’s just time. It’s a little cliche, but you close one chapter and open a new one,” said owner Vito Greco.

Located near Coxwell subway station at 1528 Danforth Ave., Greco’s family has welcomed Torontonians for decades into the small restaurant to enjoy pizzas and pasta.

Debbie Visconti, the executive director at Community Centre 55 and past president of the Beach Metro News volunteer board, remembers going to Gerrard Pizza with friends when she was a student at Monarch Park Collegiate.

She said she would bring back slices of pizza to her teacher whenever she would return from lunch late with her friends so that he would let them into class.

“I went there this past Saturday with the same friends, one from Vancouver, and we had pizza again, just like the old days. We ran into other people we went to school with that night. They too wanted one last taste of Gerrard Pizza,” she said.

Greco said that for now, he doesn’t know what the next step is for himself and his family after closing the restaurant.

Greco said that he’s going to miss the area and the people when the shop closes.

“Most of them are like family. They’re not even customers. For the majority of them not only do I know their name but as soon as I hear their voice or see them come in, I know exactly what they want,” he said.

Greco wanted to say a big thank you to the Danforth community.

“Thank you to everybody that made this all possible. If it wasn’t for the people, we wouldn’t have had a shop,” said Greco.

To check out the menu for the last time, visit http://www.gerrardpizza.com/