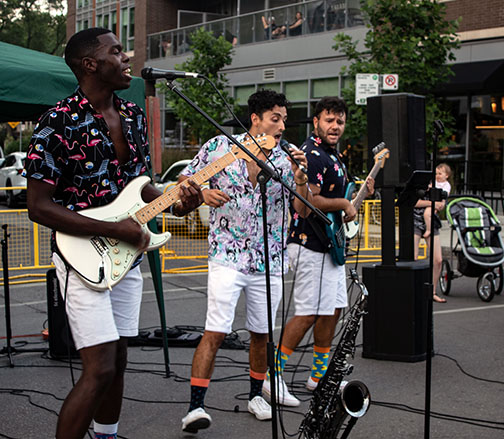 The 31st annual Beaches International Jazz Festival’s popular Streetfest will see the closure of Queen Street East in the Beach tonight and Saturday night as musicians and music lovers flock to the area.

From Woodbine to Beech avenues, Queen Street East will be closed to traffic and more than 40 locations will be hosting bands and performers each evening from 7 to 11 p.m.

More than 45 bands will be taking part and performance times are staggered to maximize listening pleasure for the thousands of visitors who flock to the street each evening.

Bands slated to perform at Streetfest include Samba Squad (at the southeast corner of Queen and Woodbine); Blackboard Blues Band (in the northwest driveway of Toronto Fire Station 227 on Queen just east of Woodbine); Clint Ryan and The Burgess Brothers; Paul James Band; Old Man Flanagan’s Ghost; Megacity Swing Band; The Chicago Project; The Metro Big Band; the Black Knight Brass Band (made up of seven members who recently graduated from Malvern Collegiate and will be playing at Kippendavie and Queen); and the Toronto All-Star Big Band. Also, the Balmy Beach Club, 360 Lake Front, at the foot of Beech Avenue, will be welcoming the Arsenals in performance on Saturday night.

A complete listing of all of the bands taking part in Streetfest and the exact locations on where they are performing can be found at www.beachesjazz.com/events/streetfest-july-25-27

Area residents are reminded that there will be a number of road closures and changes to TTC routes on July 26 and 27 due to the Streetfest.

According to Toronto police, Queen Street East will be completely closed from Woodbine to Beech avenues from 6 p.m. to midnight for Streetfest.

TTC streetcars will be diverting around Queen Street East in the Beach, heading only as far east as the Woodbine Loop before turning back westbound from 5:30 to 11:59 p.m. on Streetfest nights.

There will be modified bus services provided on the Main Street and Woodbine Avenue routes during the hours Queen Street East is closed. The 64 Main bus’s route will be altered so that it crosses Queen at Wineva and travels all the way south to Alfresco Lawn where it will head west to Lee Avenue. The bus will then travel north on Lee up to Williamson Road and then rejoin its regular route heading north on Southwood.

For more info on the TTC route changes, visit https://www.ttc.ca

There will be both Main Stage and a Big Band Stage in Woodbine Park this weekend.

For more information, complete schedules and most up to date list of performers, please visit www.beachesjazz.com