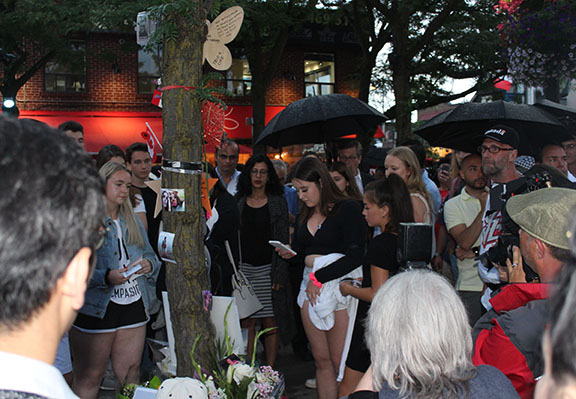 A tree with flowers , photos and tributes to Reese Fallon was on display in Alexander The Great Parkette on Monday night at vigil to mark the one-year anniversary of the Danforth Shooting. Inset photo, a memorial service was also held Sunday afternoon in Withrow Park. Photos by Alan Shackleton.

Community members turned out in large numbers on Sunday and Monday of this week to remember the victims of last year’s Danforth Shooting.

A service and choir performance was held in Withrow Park on the afternoon of Sunday, July 21, and a memorial service was also held on the night of Monday, July 22, at Alexander The Great Parkette.

Monday night’s memorial marked exactly one year since the shooting on Danforth Avenue that took the lives of Malvern Collegiate grad Reese Fallon, 18, and Julianna Kozis, 10, of Markham. Thirteen other people were wounded in the shooting.

“We share your grief, you are not alone,” said Rev. Wendell Gibbs, Toronto Police Service Chaplain, at Sunday’s memorial in Withrow Park which was attended by a large crowd including members of Fallon’s family and many of her friends and their families.

A number of those who were injured in last year’s shooting also attended Sunday’s memorial, which featured a performance by community members making up the Danforth Interfaith Choir, and the reading of a poem by Toronto Poet Laureate Al Moritz.

A pair of trees were also planted in Withrow Park in memory of Fallon and Kozis.

“May they grow strong to represent the strength of our community,” said Gibbs.

Mayor John Tory was among the many politicians who attended both Sunday’s and Monday’s memorials. “It’s a very resilient community,” said Tory after Sunday’s service. “So many people across the city have a connection to the Danforth and it shocked the entire community.”

Rev. Walter Kelly, of Toronto Paramedic Services, spoke at Monday night’s vigil and told those in the large crowd at Alexander the Great Parkette, where the shooting began last year, that their presence at the event made a difference and was an important way to show support for the victims and their families and to continue the healing process.

The memorial featured a ringing of the bells at nearby St. Barnabas Church, which rang 28 times to reflect the combined ages of Fallon and Kozis.

A steady rain fell as the large crowd in the parkette at Logan and Danforth avenues stood silently, listening to the sounds of only the bells ringing and the rain bouncing off the ground and the many umbrellas that were being held.

Kelly reflected on the area of the parkette, and how it is such a popular community gathering spot with people sitting around the fountain on summer nights.

“Who could have imagined that the dynamic, exciting summer night on the Danforth would be lit up with emergency lights,” he said. “And the wonderful music of joy would be drowned out with the sound of sirens and emergency vehicles.”

A tree in the parkette was adorned with many tributes, including flowers and photos, to Reese Fallon which were set up by her friends and her sister Quinn.