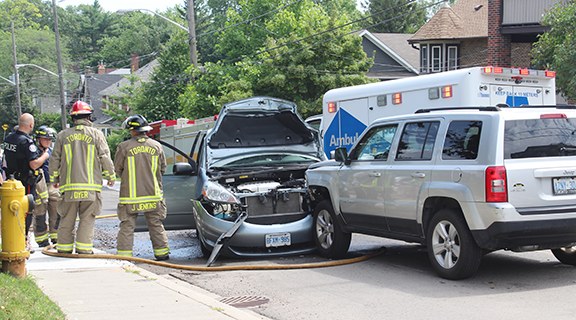 No one appeared to be injured and no one needed to be taken to hospital after this two-vehicle crash Monday, July 22, afternoon on Fallingbrook Road just south of Kingston Road. Photo by Alan Shackleton.

Emergency crews were called to the intersection at approximately 2:45 p.m. for a head-on crash between an SUV and a minivan.

The initial call indicated a person was trapped in one of the vehicles, but police said no one needed to be taken to hospital as a result of the crash.

The crash, which was a near head-on collision took place on Fallingbrook just a few feet south of Kingston Road and involved a northbound minivan and a southbound SUV.

Police are continuing to investigate the accident, and tow trucks were on the scene as of 3:20 p.m. waiting to move the vehicles.