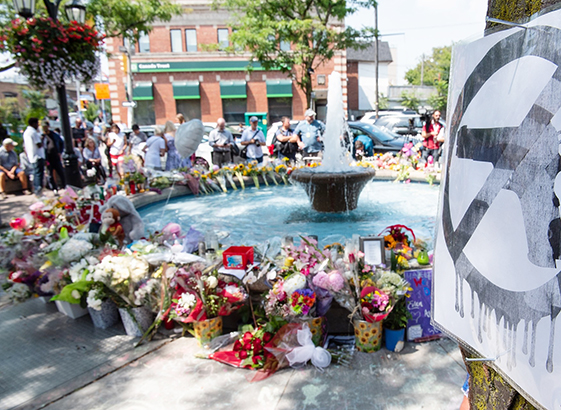 Flowers ring the fountain at Alexander the Great Parkette on Danforth Avenue last July to honour the victims of the Danforth Shooting. A sunset vigil to mark the one-year anniversary of the shooting is set for this Monday, July 22, at the parkette.

Local residents are invited to lend their voices in song to honour the victims of last year’s Danforth Shooting.

The choir sing is one of two events planned locally to mark the one-year anniversary of the shooting in Greektown on Danforth Avenue on July 22, 2018, that took the lives of Malvern Collegiate grad  Reese Fallon, 18, and Julianna Kozis, 10, of Markham. Thirteen other people were wounded in the shooting.

“It’s an honour to have the opportunity to express gratitude with the community, and using music to express what words can’t,” said Donaldson of Sunday’s choir event.

The choir sing is part of a half-hour ceremony that will be led by the Toronto Police Services Chaplain Rev. Wendell Gibbs.

There will be several commemorations at Sunday’s event including the reading of a statement from the Faith Community on the Danforth, a reading of an original poem by City of Toronto Poet Laureate Al Moritz and a moment of silence for the victims.

A City of Toronto water truck will be in the park and refreshments will be provided by the Broadview Danforth BIA.

There will also be resources available for emotional support, including therapy dogs.

The community choir will have one rehearsal on Thursday, July 18, at 7 p.m., at Eastminster United Church, 310 Danforth Ave. That rehearsal is open to all to attend.

On Monday, July 22, at 8:51 p.m. a community sunset vigil will be held at Alexander the Great Parkette, northeast corner of Logan and Danforth avenues, to commemorate the exact anniversary of the shooting. Those attending Monday’s vigil are asked to bring candles to light.

As part of the vigil on Monday night, the St. Barnabas church bells will ring, and then there will be a moment of silence.

City of Toronto staff will also be at Monday’s vigil to assist those who may require emotional support.