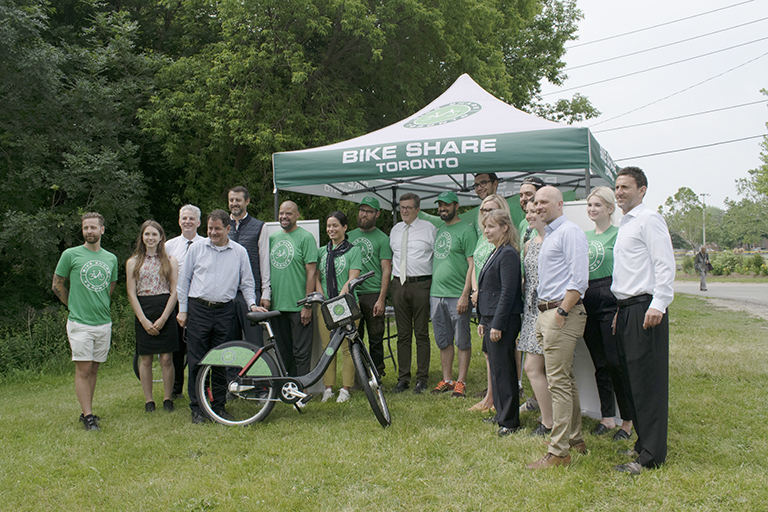 Toronto Bike Share is expanding its network into East Toronto to better serve residents and visitors.

The goal is to reduce traffic congestion and environmental degradation by adding 105 stations and 1,250 bikes to the existing network.

Mayor John Tory made the expansion announcement at a news conference on Thursday, July 11, in Dentonia Park.

“In the past 12 months alone, Bike Share Toronto reached a new record of 2.1 million rides, the most rides ever in a 12-month period,” said Tory.

“I think this is an indication that this expansion is warranted, that the continued confidence in this program is warranted, and it reflects the success of the program.”

The federal government allocated $4 million in funding through its Public Transit Infrastructure Fund (PTIF) which the City of Toronto matched to improve and expand the Bike Share Toronto infrastructure.

Many of these new stations will build upon the peripherals of the existing network, including expanding into the Upper Beaches.

One new station has recently been constructed at 2230 Gerrard St. E., in front of Ted Reeve Arena just east of Main Street.

As in previous expansions, many of the new Bike Share stations will be near TTC subways in an effort to have residents incorporate cycling into public transportation commutes.

From 2016 to 2018, more than 100 kilometres of existing bike lanes were enhanced and upgraded in Toronto.

“This is all part of the plan to connect and grow and renew infrastructure for Toronto cycling roots and also to enhance safety at the same time,” he said.