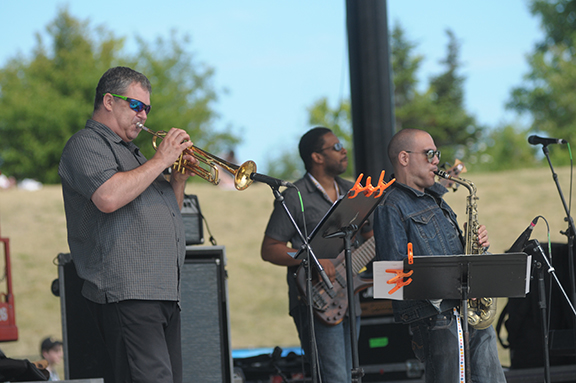 The Beaches International Jazz Festival begins the weekend of July 5 to 7 with the Sounds of Leslieville and Riverside.

The 31st annual Beaches International Jazz Festival will be bringing music to the community for the entire month of July.

Executive Director of the festival, Lido Chilelli, was on hand with a number of sponsors, festival officials and benefactors at a recent press conference to launch the event.

“We are one of the Top 10 jazz festivals in the world and the best in Canada,” Chilelli told the crowd gathered at the Balmy Beach Club for the launch. “We are so happy to be here 31 years after we started.”

Over the past three decades, the festival has been a stepping stone for many young jazz musicians who got their start performing at the popular Street Festival along Queen Street East and have gone on to play around the world.

“We’re about nurturing young talent, and to this day we recognize the importance of doing that,” said Bill King, the festival’s Artistic Director.

To that purpose, the 2019 Workshop Series goes July 22 to 24. Over those evenings, Listen and Learn sessions for all ages will be hosted by prominent artists at the Mennonite New Life Centre on Queen Street East in the Beach.

King added that along with providing fantastic musical opportunities for both music fans and musicians, the festival has always prided itself on being a family event.

This year’s line up of musicians, as always, provides a wide variety of music styles, said King, noting there is an emphasis on funk and soul for this year’s festival.

That being said, there is something for everyone at this year’s festival which begins the weekend of July 5-7 and continues through until July 28.

Sounds of Leslieville
and Riverside – July 5 to 7

On July 6, music on the Main Stage begins at 12:30 p.m. with A Fellow Ship and continues with Tennyson King, Soukustek, Dr. Draw, Paul James Band and My Son Hurricane at 9:30 p.m. to wrap things up.

On July 7, the music starts with The Lesters at noon, followed by The Implications, Azalyne and at 4:30 p.m. AIZA takes the stage.

The Block Party will feature performers at a number of street corner and park locations along Queen Street East between Broadview and Booth avenues.

On July 5, from 7 to 10:30 p.m., the following bands and locations are slated: MOKA will be at Lewis; Stacey Renee will be at Saulter; Soul Session will be at Bolton; Toronto All Star Big Band will be at Degrassi; Soukustek will be at McGee; The Imbayakunas will be at the southeast corner of Jimmie Simpson Park; ROZ DE LA CRUZ will be at Booth Street; and GRACE will be at 904 Queen St. E.

On July 6, there will be two sessions of performances; one in the afternoon and one in the evening.

The July 6 evening session, from 6 to 10 p.m., features MOKA at Lewis; The Jerome Tucker Band at Saulter; Soul Session at Boulton; The Rockin Mojos at Degrassi; Soukustek at McGee; The Imbayakunas at the Jimmie Simpson park corner; Accolades at Booth; and GRACE at 904 Queen St. E.

On July 14, DJ Rhymes starts the music at 1 p.m. Next on stage is Evaristo Machado & Band at 1:30 p.m.; followed by Zumba Happy Feet Team with Tathiana, Pilar, Zuleidi & German at 4:30 p.m. Sunday’s performances wrap up with the International Show – Tribute to Celia Cruz with Claudia la Gitana at 6:30 p.m.

On the Main Stage, reggae and funk are on tap the night of July 19. Opening up the entertainment will be Tribute to Studio One: Reggae Got Soul at 7 p.m. The night wraps up with The Funk Frequency at 9 p.m.

There’s also an A Capella Stage on July 19 to 21 at Woodbine Park.

Performing on July 19 at the A Capella Stage are the Waterfront Singing Ambassadors at 5:30 p.m. and Planting Pearl at 6:30 p.m.

The free Workshop Series for all ages offers Listen and Learn sessions at the Mennonite New Life Centre, 1774 Queen St. E., from 7 to 9 p.m. Musicians will be interviewed by the jazz festival’s artistic director King.

On July 22, Canadian singer, composer and pianist Laila Baili will be the guest artist.

On July 23, the session will feature Toronto artist Julian Taylor.

Those wishing to take part in the Workshop Series are asked to please register in advance by emailing programsbeachesjazz@gmail.com

Arguably the jazz festival’s most popular event, the Queen Street East Streetfest takes place Thursday, July 25 through to Saturday, July 27 in the Beach.

From Woodbine to Beech avenues, Queen Street East will be closed to traffic and more than 40 locations will be hosting bands and performers each evening from 6 to 11 p.m.

More than 45 bands will be taking part and performance times are staggered to maximize listening pleasure for the thousands of visitors who flock to the street each evening. A complete listing of the bands and the venues can be found at https://www.beachesjazz.com/events/streetfest-july-25-27

The final weekend of the festival sees performances at the Main Stage in Woodbine Park on Friday, July 26, Saturday, July 17 and Sunday, July 28.

Along with the Main Stage, there will also be a Big Band Stage in Woodbine Park that weekend.

For more info, complete schedules and most up to date list of peformers, please visit https://www.beachesjazz.com