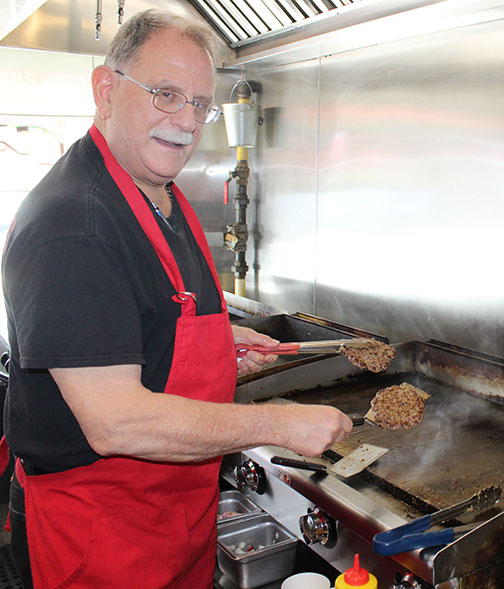 David Brown at the grill at Fearless Meat on Kingston Road. Photo by Alan Shackleton.

Are you ready for the summer? And barbecue season?

If so, David Brown at Fearless Meat in the Kingston Road Village has a few tips to help cook up some perfect burgers, steaks, chickens and veggies.

A butcher for 49 years and an internationally recognized meat consultant and barbecue expert, Brown is known as The Butcher of Canada after cooking for Julia Child.

In January of 2018 he opened Fearless Meat, which is a restaurant, not a butcher shop, and the location at 884 Kingston Rd. has been drawing lots of fans of its Montreal smoked meat, burgers, chicken, fries, ice cream and more ever since.

When it comes to a successful cookout, Brown said “Get to know your barbecue. Each one is different. They’re going to have hot spots and cold spots, different temperatures and different wind sensitivity.”

It’s also good to know where the flare ups most often occur on the barbecue and to keep a spray bottle of water to knock them down.

Keeping everything clean is also crucial to a successful barbecue.

Clean hands, tools, and grill are extremely important, as is avoiding cross contamination between raw meat and cooked meat.

Brown said far too many people bring out a plate with raw chicken, steaks or burgers on them, toss the food on the grill and then serve it up on the very same plate on which the raw items had been sitting.

Also, keep the temperature down when cooking. It’s important to take your time, low and slow.

Many people cook at too high a temperature and that often makes for a tough to chew or burned serving.

“Meats vary in heat conductivity and that differs between different cuts and say between chicken and beef,” he said. “Cook slowly and let the heat penetrate.”

For a lot of people, cooking chicken breasts on the barbecue is a real challenge.

“Many people burn them on the outside because the inside takes longer to cook,” Brown said.

“What to do is barbecue them at a lower temperature and flip them over frequently so they cook through without burning.”

Since chicken breasts are often quite thick, Brown also suggests butterflying to make them thinner so they will cook faster on the grill.

Brown has posted a short video on the Fearless Meat website instructing folks how to do this. Alternatively, you can bring them into Fearless Meat and their chefs will butterfly them for you at no charge.

There are all kinds of theories when it comes to making a great steak, but Brown said one of the more important decisions is the cut of meat you buy.

Knowing the cut of meat you have is important.

While tenderloins and strip loins get most of the attention in the steak department, Brown said rib steaks and blade steaks are also great choices.

He admitted that a lot of outdoor chefs have their tried and true methods of cooking steak, and will never change.
“If you have something that works for you, by all means keep doing it,” said Brown.

Some folks like to have the grill smoking hot and then put the steak on and flip quickly to sear both sides. That can work if done properly, but high temperatures tend to dry out the meat quickly, and the goal is really to let the juices settle evenly throughout the steak, said Brown.

Also, he said, don’t be a steak snob and sneer at those who want it cooked differently from the way you prefer.

“No one needs to feel pressured about how well done they order their steak,” Brown said.

Whether your guests like them rare, medium or well done, that’s their decision and very much a personal preference.

Brown said a touch test can let you know how well done the steak has been cooked. A rare steak is soft to the touch. A medium steak has a spring to it, and a well-done steak is firm to the touch.

He suggests the touch test be done with the back of fork, tongs, or a spatula to avoid piercing the meat and letting out juices. Or you could also use a meat thermometer.

There’s also different theories on seasoning and whether to put it on before or after the steak is on the grill. While seasoning can draw moisture out of the meat if applied before cooking, he said it was not a huge deal and people should defer to their personal preferences.

If you’re looking to cook a crowd pleasing burger, you’d do well to follow what they do at Fearless Meat.

Their beef patties are six ounces of Certified Angus Beef with no fillers, about a half-inch thick and seven inches diameter when they hit the grill and shrink down to about four-and-a-half inches when completely cooked.

Brown said the key to a good burger is to keep it simple.

Buy good quality ground beef with about 80 per cent lean when making the burger. Pass on any of the fillers and add just a little bit of spice.

If your burgers are too thick, it will be challenging to avoid serving up something that’s burned on the outside because the inside will take so long to cook.

Ground meats go through meat grinders under high pressure and are subject to rapid quality deterioration.  If you are not going to use it within one day of purchase, it should be frozen, ideally as preformed burgers in air tight ziplock bags or saran wrap to minimize freezer burn.

Always cook your burgers until the juices run clear and the pink just disappears.

Again the key is not too high a temperature as it quickly dries the veggies out.

Also, coat the veggies in oil to avoid burning on the outside.

There’s lots of summer to come and lots of chances to barbecue, whether it’s for just the family or for a big crowd, and the Fearless Meat website will have many more tips and opportunities to learn how to make the most of it including videos.

The site can be accessed at www.fearlessmeat1.com