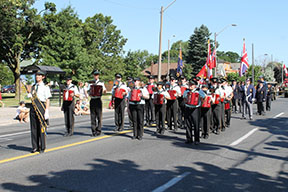 Canada’s 152nd birthday this Monday, July 1, will be celebrated in style with parties, fireworks displays and a parade all planned.

In the Beach, Woodbine Park will be the site for the Q107 Canada Day Picnic which runs from noon until dusk.

The night will be capped off with the annual Canada Day fireworks display set for Ashbridges Bay beginning at approximately 9:45 p.m.

As always, those planning on attending the Ashbridges Bay fireworks are reminded that the event draws huge crowds and its best to stake a viewing spot early.

Charlie, a 10-year-old Siberian Husky of the East York and Beaches community, was stolen from in front of a store on May 14, leaving his owners heartbroken.

Two days later, Cottrell spotted Charlie and returned him to his owners.

Cottrell and Charlie, accompanied by Charlie’s owner Carol Bouley, will have a place of honour in the July 1 East York parade, riding in a classic convertible provided by a community member.

The 2019 East York Canada Day Parade begins at 10 a.m. on July 1 outside Dieppe Park, 455 Cosburn Ave.
It then makes its way east along Cosburn Avenue where it will turn south onto Coxwell Avenue and head down past the East York Civic Centre to Salmon Avenue.

From there it heads east along Sammon before turning northbound at Woodbine Avenue to head up to its finishing point at Trenton Avenue by Stan Wadlow Park, 373 Cedarvale Ave., at approximately 11:30 a.m. for the festival.

More than 50 groups are expected to march in the parade.

The parade is immediately followed by the day-long community festival in Stan Wadlow Park, which will feature fun family activities for all ages.

There will be an amusement-park midway, the Muddy York Brewery beer market, and more than 70 different food and craft vendors.

And as always, the Canada Day celebrations in East York will be capped off with a fireworks display set to begin at approximately 10 p.m. in Stan Wadlow Park.

Everyone is invited to the family friendly party which begins at noon and continues until 7 p.m.

There will be a bouncy castle, a dunk tank, a barbecue (including one free burger or hot dog with cake and ice cream per person), and music for those attending to enjoy.

Providing the musical entertainment for the day will be Ronnie & The Corvairs.