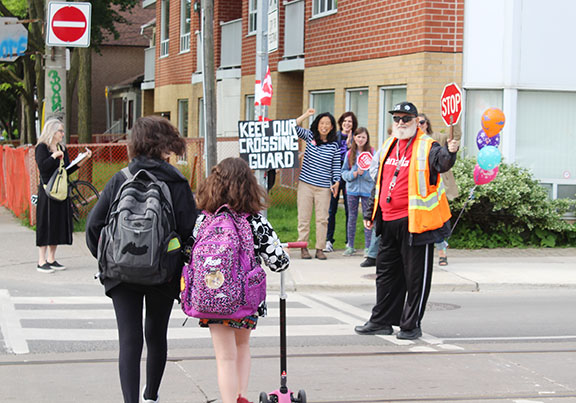 Parents and community members held a rally last week to try and make sure they do not lose their crossing guard, Alan Mainguy, who works at the intersection of Leslie Street and Gerrard Street East. Photo by Alan Shackleton.

As part of the Toronto Police Service’s (TPS) modernization, responsibility for Toronto’s School Crossing Guard Program will be shifted from police to the City of Toronto’s Transportation Services department. As of Aug. 1, the city is expected to be handing over the program to two private contractors.

Police are passing on the crossing guard program to the city’s Transportation Services as part of a modernization plan to have officers focused on essential police duties.

According to the TPS Action Plan: The Way Forward report, when a school crossing guard is unable to show up for work, a police officer is dispatched to fill in, leading to time away from police duties. In 2015 this resulted in 3,138 hours of officer time away. The plan concludes that the school crossing guard programs should and will be recognized as non-policing activities.

Under the new system, there is no guarantee that crossing guards who are currently TPS employees will end up back at their current locations, or be hired back by the private companies contracted to now run the program.

This move has raised anger and concern locally. A petition is currently circulating demanding that currently employed crossing guards employed by the program are given the option of holding onto their locations and their jobs.

“Crossing guards like Alan Mainguy, who work at the corner of Leslie and Gerrard have been helping residents cross the street safely for many years. Their presence on our street corners are a fundamental part of healthy communities,” the petition reads.

Parents who wanted to make sure that crossing guard Mainguy keeps his job at Gerrard Street and Leslie Street gathered on June 17, morning to show their support for him.

He has been working the crosswalk at the intersection for the past 13 years, and was named School Crossing Guard of the Year by Toronto police in 2012-2013.

“We’ve been privatized by the city,” said Mainguy in a brief interview. “They have not guaranteed that we will be getting our jobs back.”

Local residents are doing everything they can to make sure that he remains their community crossing guard.

“God knows how many lives he’s saved by being here,” said parent Cinders McLeod. “If he wasn’t, there would be a tragedy. This is what will happen if we start making cuts to crossing guards.”

In a letter to Mayor John Tory, Toronto-Danforth Councillor, Paula Fletcher expressed concern about the shift of the program.

“I hope that as a Council we can find a way to ensure crossing guards can return to their current jobs and locations if they continue to meet the requirements,” she wrote.