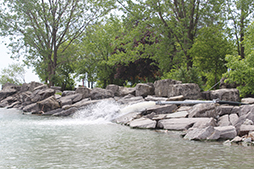 A pump shoots water from the 'pond' on Woodbine Beach off the rocks at Ashbridges Bay and back into Lake Ontario. Photo by Alan Shackleton.

The City of Toronto’s waterfront parks department started pumping operations last week at Woodbine Beach to get rid of the massive amount of water that has formed a huge pond between the Woodbine Bathing Station and Ashbridges Bay Park.

The pumping operations which started on Wednesday, June 19, are seeing approximately 2,600 gallons-a-minute of water being pumped out of the pond that developed due to high lake levels, heavy rains and windy conditions earlier this year.

James Dann, manager of waterfront parks, told Beach Metro News that the goal is to have the vast majority of the water pumped out in time for the Canada Day fireworks display at Ashbridges Bay this Monday, July 1, night.

However, that all depends on the weather, he said. Heavy rain and high winds will make the task more challenging.

A similar situation occurred in 2017 when high water levels in Lake Ontario caused the formation of a pond on the beach by the volleyball courts. That summer also saw severe flooding on Toronto islands which led to closures for a good part of the season.

“Lake Erie is also very high and there’s no off-switch between Lake Erie and Lake Ontario so we know the levels are going to still get higher.”

The other reality is that the lake water doesn’t just blow over the sandbar on the shore into the pond, it also seeps up from below.

“The lake is under the sand so the lake water comes up from underneath as well,” said Dann.

As of now one pump is working full time to move the water and it seems to be going well so far.

“It’s moving a lot of water,” said Dann. “Those pumps are very powerful.”

One of the challenges though is to make sure only water, not sand, is being pushed through the pumps.
To that end, a cistern or well with concrete piping was being installed (much like a sump pump in a house) which can draw water into the pumps from a deeper pool.