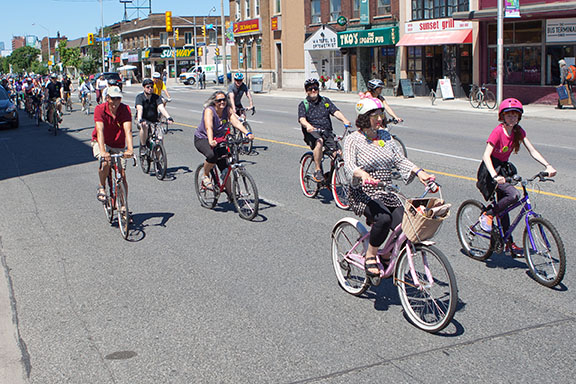 Cyclists from across Toronto are expected to converge on Danforth Avenue this Saturday, June 15, for the eighth annual Bells on Danforth event.

The family friendly bike ride begins at 11 a.m. at the north end of Withrow Park, on Logan Avenue south of Danforth Avenue, and will travel for eight kilometres along the Danforth.

Organized by a number of local cycling groups, the event aims to raise awareness of the need for safe cycling options on the Danforth.

“According to bicycle counts over 3,000 cyclists are riding along Danforth, for transportation, recreation and shopping,” said Bells on Danforth organizer Mary Ann Neary in a press release.

“As the city grows, we feel it is more important than ever that the Danforth be recognized as an integral part of Toronto’s cycling network. We have seen from the success of Bloor, Richmond and Adelaide that more and more people are using protected bike lanes as routes to get around Toronto by bike.”

The route for this year’s ride will see cyclists travel east along Danforth Avenue from Withrow Park all the way to Danforth Road in Scarborough, and then back to the Oakridge Community Centre on Pharmacy Avenue. At the community centre, participants can join in a fun fair and/or take part in a Scarborough Safe Streets event.

“We are so pleased to serve as the endpoint for this wonderful ride and this year we’re thrilled to be able to highlight so many groups working to make our streets safer for pedestrians, cyclists, and drivers,” said Louise Gilmour, a member of Toronto East Cyclists in a press release.

For more information, go to www.bellsondanforth.ca