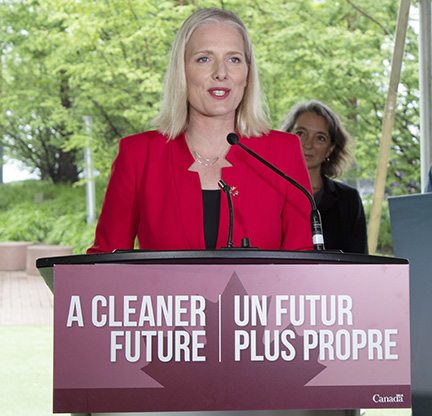 Canada will have a ban on single-use plastics by 2021, Environment Minister Catherine McKenna announced on Monday in Toronto.

The announcement had originally been scheduled to be made at Cherry Beach on the morning of June 10, but was moved to the Harbourfront Centre due to the rainy conditions.

While the official list of banned items isn’t set in stone, McKenna mentioned items like plastic straws and cutlery that are likely to be outlawed, as “there are a number of affordable alternatives out there, and science shows it’s the best way to manage the issue.”

Acknowledging the value of plastic for several industries, she said that the problem “isn’t plastic but plastic pollution.”

Every year, Canadians throw away of three million tonnes of plastic waste, representing up to $8 billion per year in lost value. Most of this plastic ends up in lakes, oceans, rivers and landfills.

The federal government has pledged that the policy will be based on scientific evidence, and to that effect, Chelsea M. Rochman, Assistant Professor, Ecology and Evolutionary Biology at the University of Toronto was invited to speak on Monday.

“As we stand here today, on the shores of Lake Ontario, I can tell you that we found microplastics in our surface waters, in our sediments, in our local fish and in the drinking water we pulled from the lake,” she said.

Discussing potential solutions ranging from cleanups, reductions in waste and improvements in waste management, she outlined that, “there is no silver bullet solution to plastic pollution.”

The move has been met with support from local Liberal MPs.

“Plastic pollution is a growing threat in Canada and around the world, and we cannot afford to ignore it,” said Toronto-Danforth MP Julie Dabrusin, who delivered the opening statement at Monday’s announcement. “These are crucial steps we need to take as a country, and I’m proud of our government for stepping up.”

Beaches-East York MP Nathaniel Erskine-Smith said there is a huge concern among residents, both local and across the country, concerning plastic waste and its impacts.

“Since our event at the Fox with the Water Brothers, we’ve been overwhelmed by the many calls to tackle plastic pollution, including from students across our east end community,” he said.  “Our government has listened to those calls, with national action to protect our oceans.”

In November, environment ministers including McKenna finalized a strategy on Zero Plastic Waste that identified single-use plastics as one of the 10 priority “areas for actions.” The strategy outlines a commitment for plastic products to be designed for reuse, and improving the recycling of single-use plastics.

In her announcement, McKenna also outlined how the government will work together with several companies supporting environmental initiatives.

“We will fully transfer the costs and the responsibility for the collection and recycling of plastic products and packaging… to the companies that generate plastic waste in the first place, working in partnership with provinces and territories,” she said.

However, there are still some unanswered questions about the impact on the economy.

The Conservative Party of Canada criticized the lack of a clear plan for the 93,000 Canadians employed in the plastics industry in more than 1,900 companies based mainly in Ontario, Quebec and Alberta. The slowing down of business could impact their livelihood, the Conservatives said in a statement.

The announcement comes as federal parties prepare for this fall’s election with this issue of climate becoming increasingly topical, both nationally and globally. The federal NDP’s environmental plan was released over a week ago, promising to ban single-use plastics by 2022. The Conservatives have promised to release their policy in the current month.